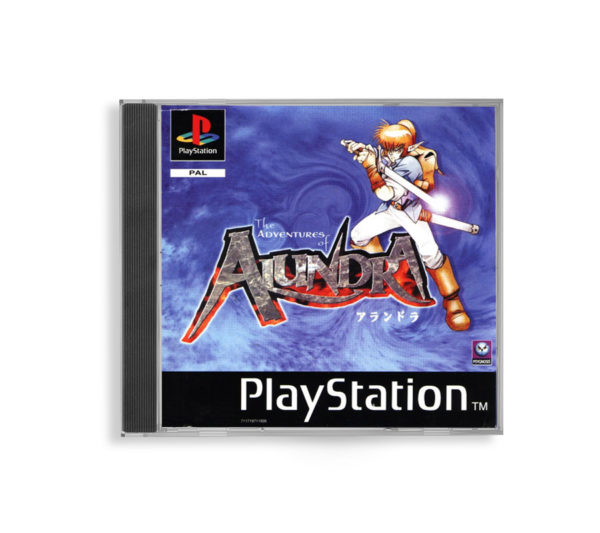 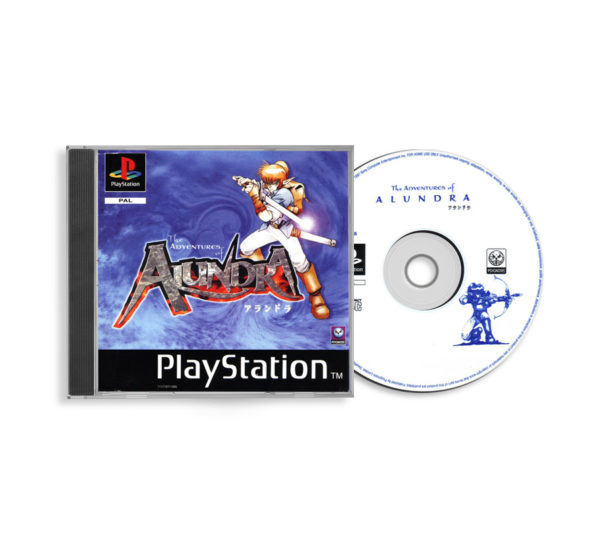 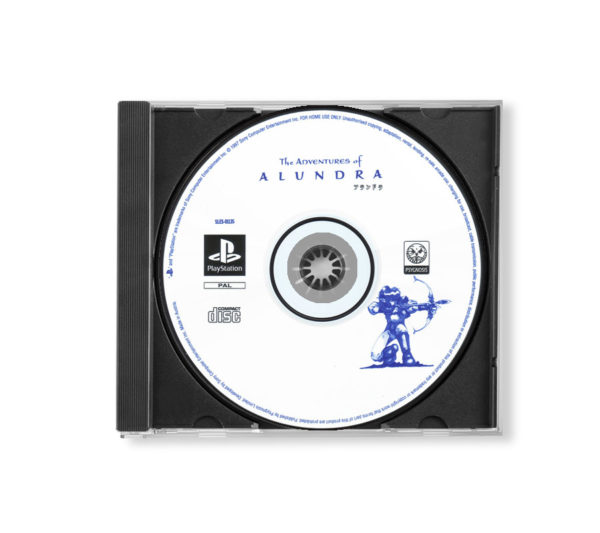 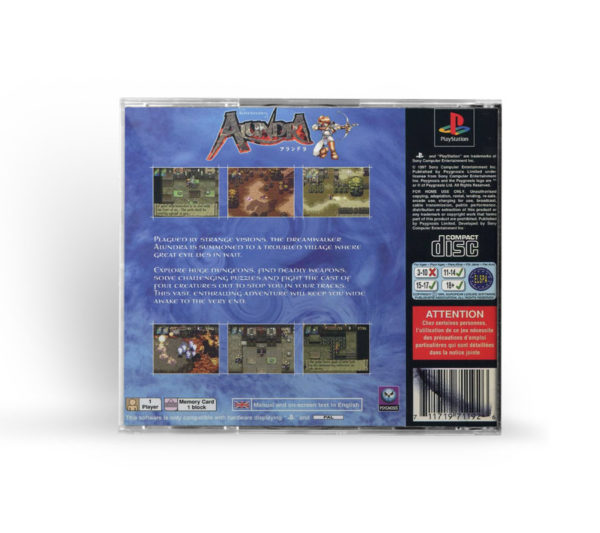 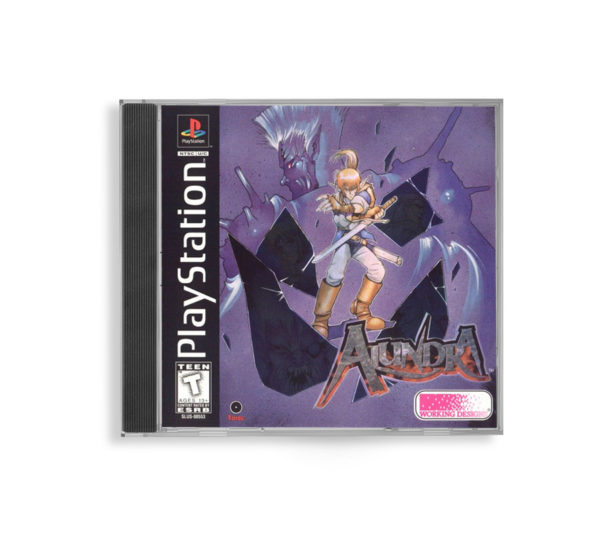 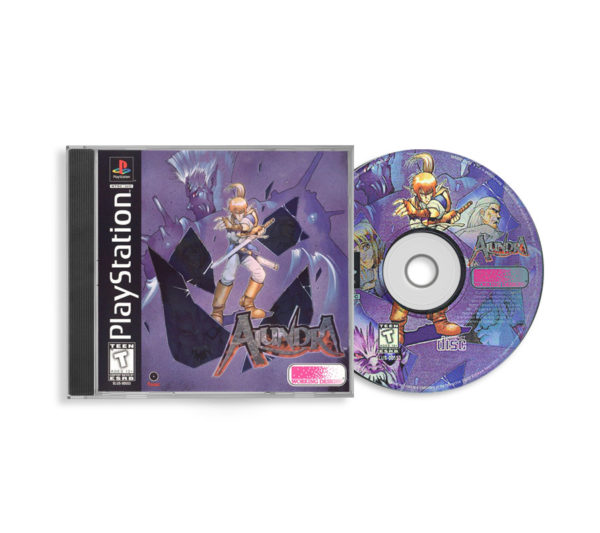 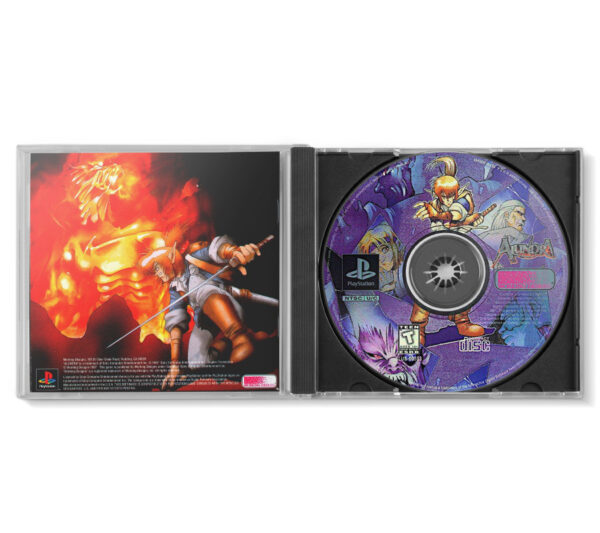 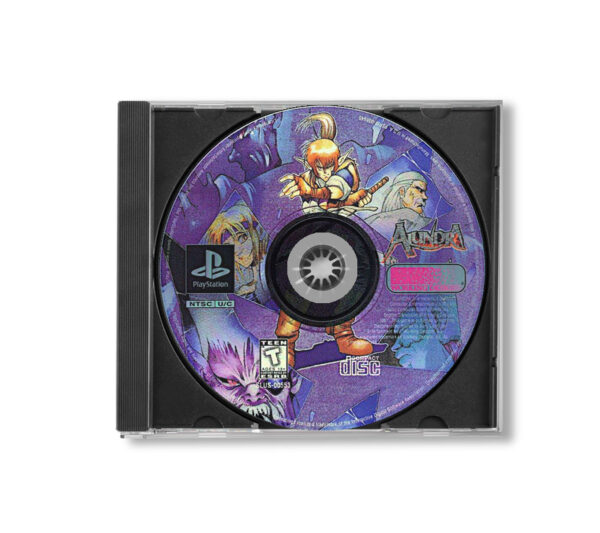 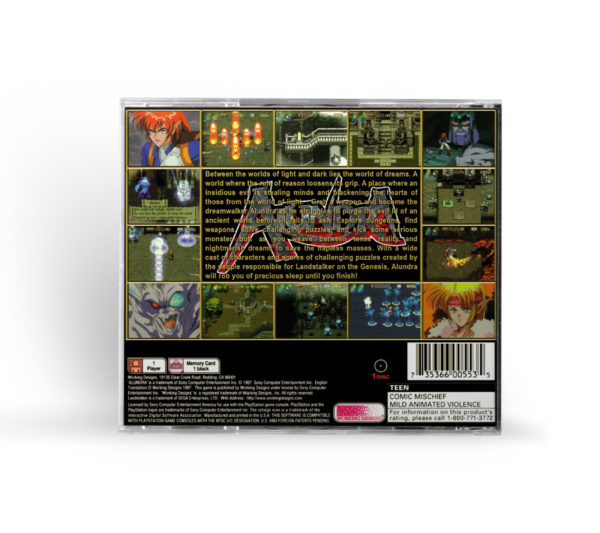 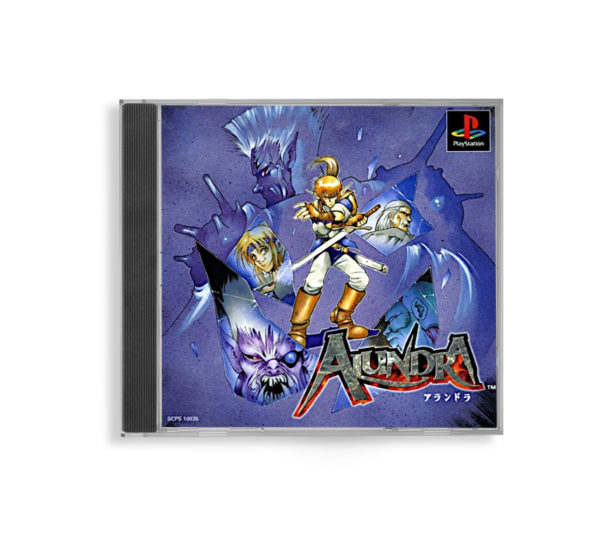 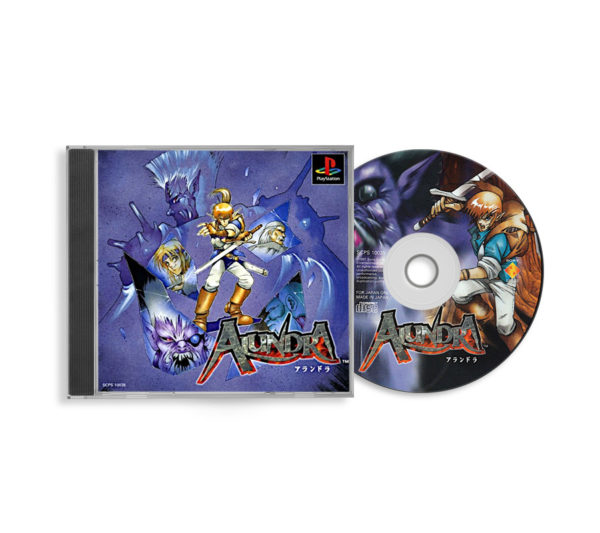 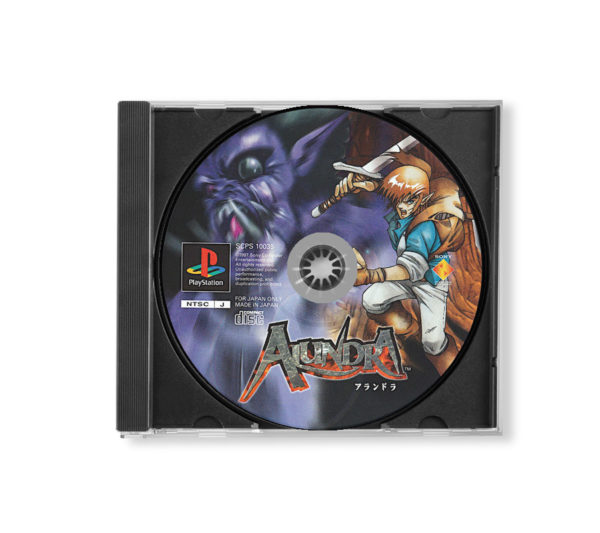 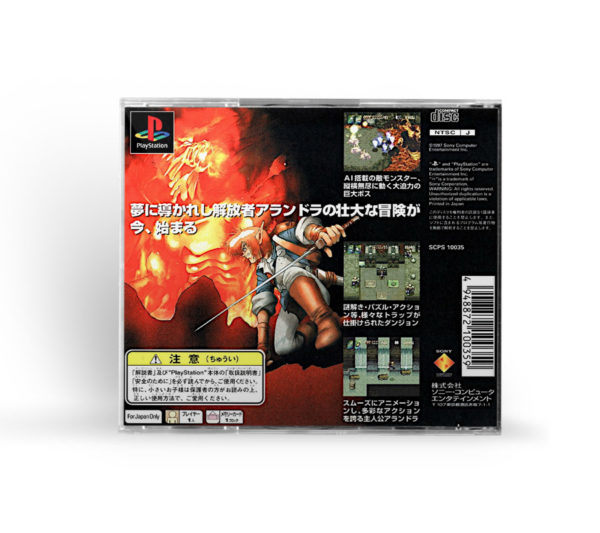 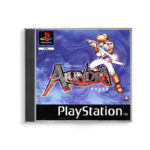 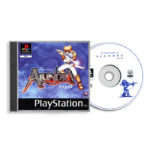 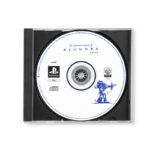 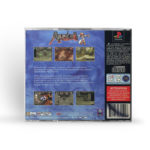 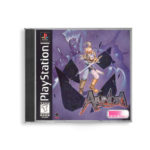 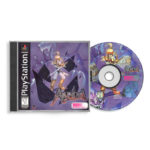 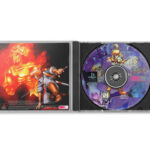 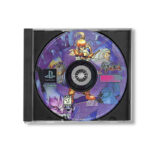 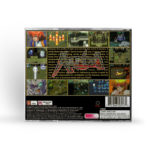 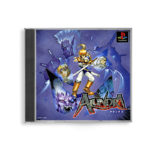 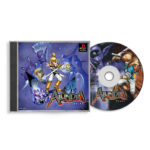 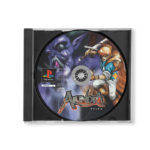 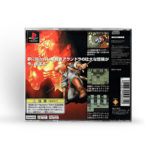 The Adventures Of Alundra

“THE ADVENTURES OF ALUNDRA” for Sony PlayStation 1 PSX.

This a reproduction game, so you will get a new high-quality CD-R (with colored silk-screen printing), in a new black jewel case, with colored covers on glossy cardboard, without manual (inside a new transparent film case).

THE ADVENTURES OF ALUNDRA for Sony PlayStation 1 PSX.

Alundra (アランドラ, Arandora), released in Europe as The Adventures of Alundra, is an action-adventure video game developed by Matrix Software for the PlayStation, originally released in 1997.

The game’s protagonist is a young man named Alundra, who learns that he has the power to enter people’s dreams. He is shipwrecked on an island, near the village of Inoa, where locals have been suffering from recurring nightmares that sometimes cause death. With his dream walking ability, Alundra proceeds to try to help the locals. The narrative becomes gradually darker and more twisted as the game progresses, dealing with mature themes such as death, clinical depression, fate, religion, and the essence of human existence.

The gameplay involves extensive exploration of the island and various dungeons, with an emphasis on challenging puzzle solving, real-time action combat, and platforming, as well as interaction with non-player characters in the village of Inoa. The main gameplay innovation is a dream walking mechanic, where Alundra can enter people’s dreams, with each of the dream levels having its own unique twist based upon the dreamer’s personality and traits.

Upon release, Alundra earned critical acclaim as well as some initial commercial success. It was praised for its well-written story and characterization, smooth game mechanics and platforming, challenging gameplay and puzzles, and expansive overworld exploration. A sequel entitled Alundra 2, which has very little in common with the original Alundra, was released in 1999.

In addition to a similar looking main character, the game’s development team consisted of former employees of Climax Entertainment. The gameplay style is top-down action-adventure and is known for containing many extremely difficult puzzles, some of which cannot be accessed if the player progresses further in the game, making some items unattainable. It is also known for its music and dark storyline. A range of terrain and surfaces also add variety, from sand, which causes the player to move more slowly, to lava, which damages the player. Upgrades throughout the game can help the player overcome many of these obstacles, encouraging exploration.

Alundra, the silent protagonist and player character, is an elf from the clan of Elna, the Dreamwalkers. He set out for a place called Inoa because of a recurring dream in which a mysterious figure who calls Alundra “Releaser” tells him that he must save the villagers from the evil of Melzas. The ship carrying Alundra is caught in a storm and is broken in half, leaving most of the crew dead and Alundra drifting unconscious.

Alundra is next seen washed ashore to an unknown beach, where a man named Jess finds and rescues him. Jess carries Alundra to his house at the village of Inoa and lets him sleep in his guest room. In the village, Alundra discovers he is a Dreamwalker, which means he has an ability to enter other peoples’ dreams, and helps the villagers get rid of the nightmares that have been possessing them. Since Alundra’s arrival, bad things begin to happen in the village, with various villagers being murdered in their dreams, which leaves them dead outside of their dreams as well. Some of the villagers eventually start blaming Alundra for what is happening.

Another dreamwalker, Meia, from the clan Elna arrives to the city and helps Alundra fight off the nightmares of the villagers. Later in the game, it is revealed that the demon, Melzas, has disguised himself as a god, and he is the source of all the nightmares of the village. His goal is to make the villagers pray for their god, and thus make Melzas himself gain power from their prayers. Ronan, the priest of the village, was also on the side of Melzas and helped him to deceive the villagers, and keep them praying for Melzas, the false god. Once Alundra discovers the truth, he gathers the information and items needed to access Melzas’ palace to defeat the demon. After Melzas is destroyed, Alundra and Meia bid farewell to the villagers and depart together, before going their separate ways.

The music for Alundra was composed by Kohei Tanaka.

Alundra is considered a spiritual sequel to Climax Entertainment’s Landstalker on the Sega Genesis, particularly because several members of the game’s programming and design team had worked on Landstalker.

The game was published by Sony in Japan, Working Designs in North America, and Psygnosis in Europe.

The game had sold 143,114 copies in Japan by the end of 1997. Following its North American release, Working Designs sold over 100,000 copies of the game in North America within a single month in early 1998.

The game was followed up by Alundra 2 in 1999. The sequel uses 3D graphics instead of the 2D that the original had. Though it holds the same name as Alundra, it is only a spiritual successor, having no ties with the original game. Later, Alundra has been made available as a downloadable game on the PSone Classics service for the PlayStation 3.

Next Generation reviewed the PlayStation version of the game, rating it four stars out of five, and stated that “Working Designs made a smart decision importing Alundra, and any gamer looking for a unique challenge is guaranteed to appreciate it.”

Famitsu gave it a 31 out of 40 score In January 1998, IGN stated, “Never have I been so tested and challenged since the old Genesis adventure title, LandStalker. And Climax has made Alundra twice as hard, twice as challenging, and twice as good as its LandStalker counterpart.” The review further states that it has “a really cool story,” “some great music and graphics that totally suit the game,” and concludes that “this game is awesome.” Electronic Gaming Monthly and GamePro both selected Alundra as the runner-up for their 1997 Best Role-Playing Game of the Year awards, coming second only to Final Fantasy VII.

In 2009, Destructoid’s Conrad Zimmerman described Alundra as a “fresh and innovative” game and “one of the finest examples of action/RPG gaming.” He particularly praised it for featuring “a plot the likes of which I had never seen before in the genre,” the strong “writing and characterizations,” and the “clever and challenging puzzles.

From Wikipedia: The Free Encyclopedia
https://en.wikipedia.org/wiki/Alundra

Be the first to review “The Adventures Of Alundra” Cancel reply