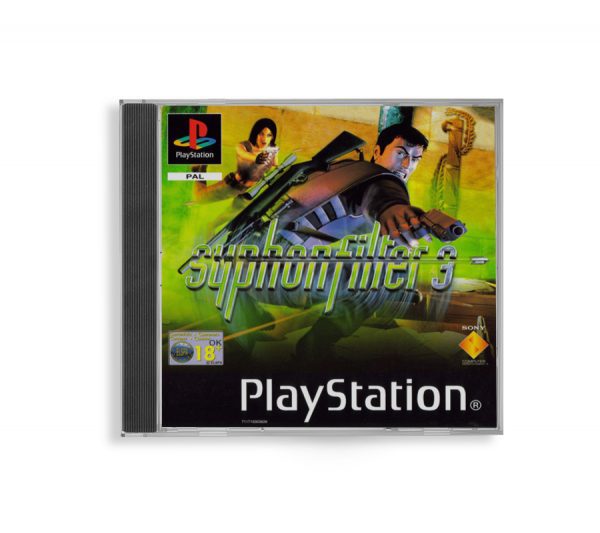 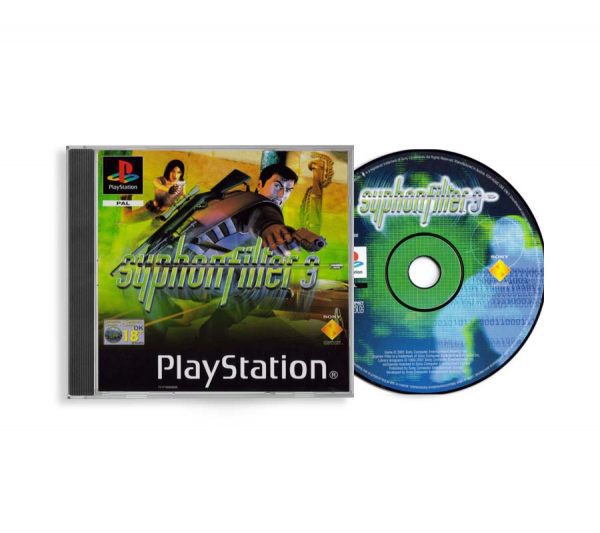 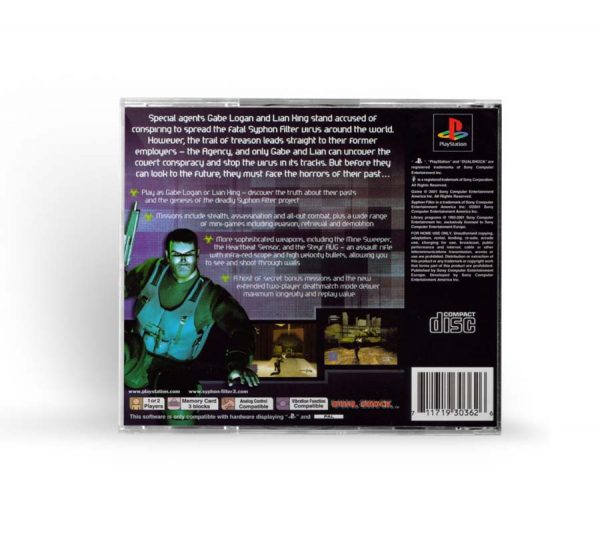 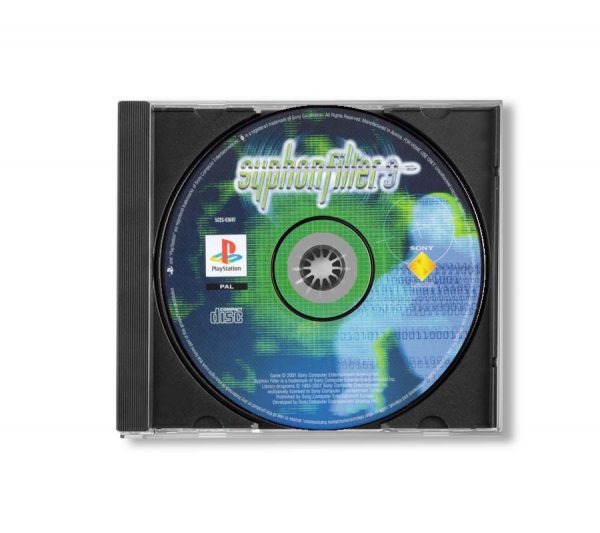 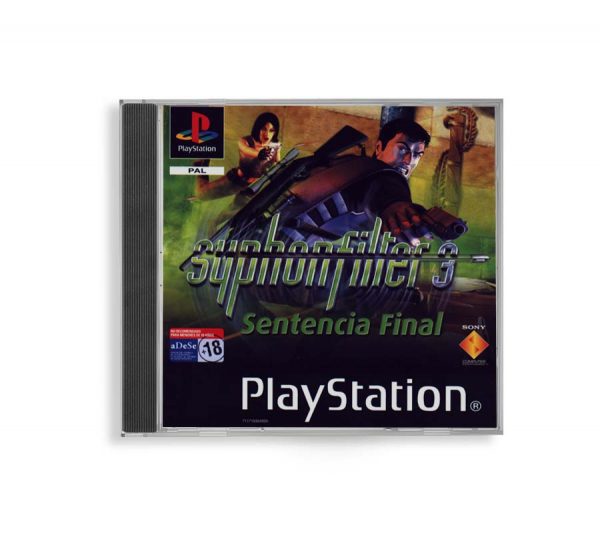 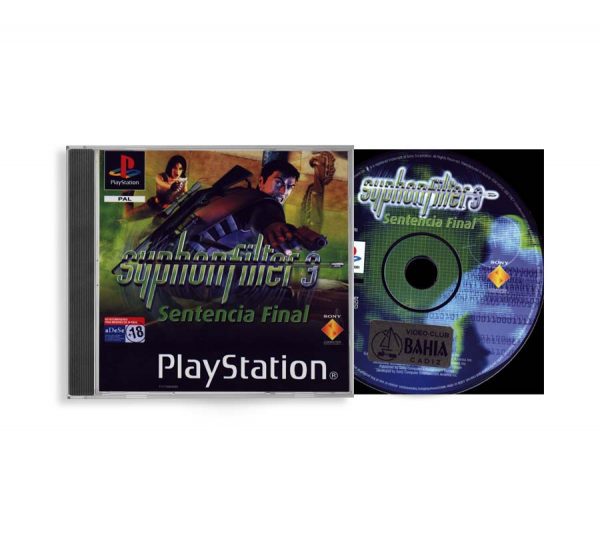 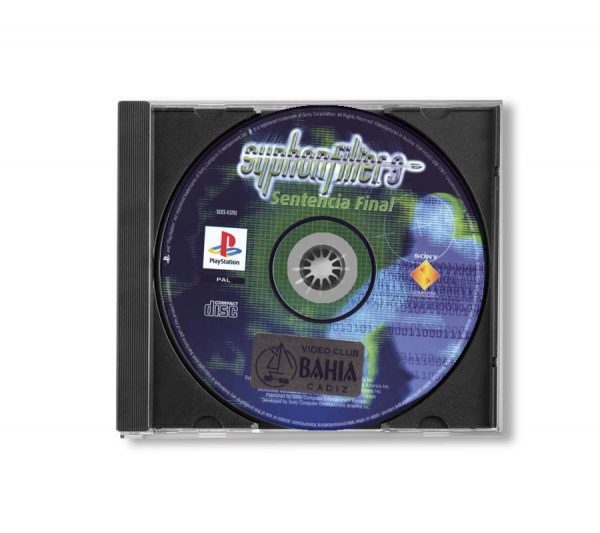 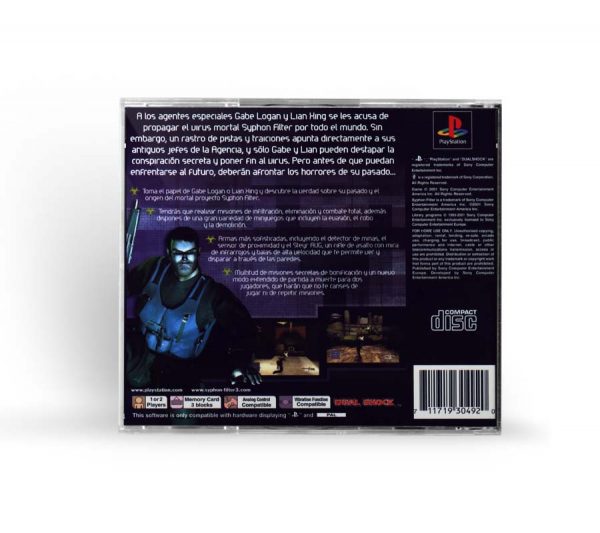 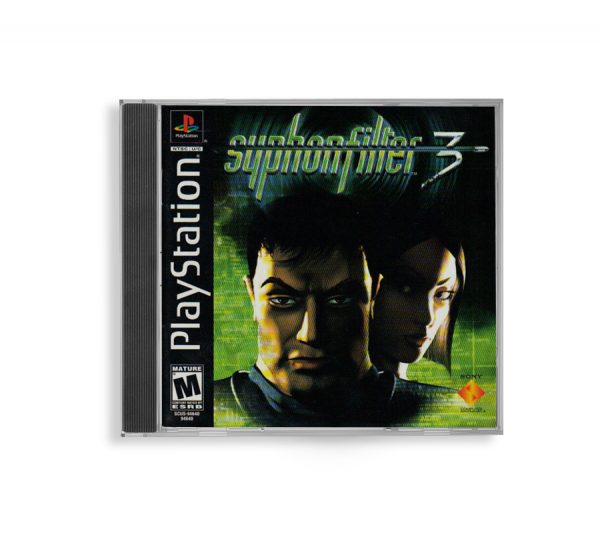 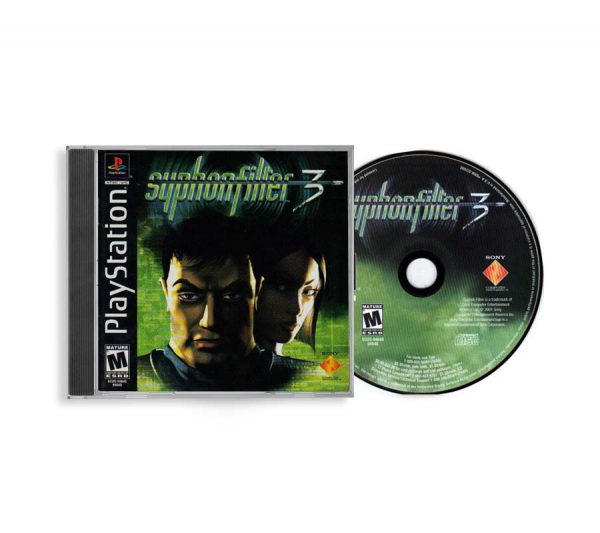 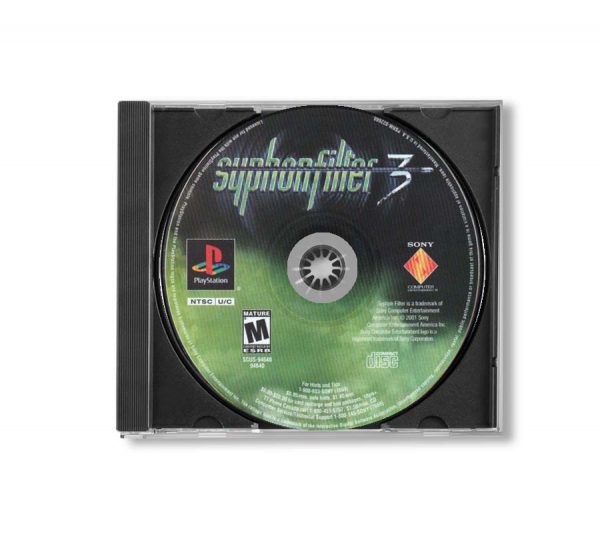 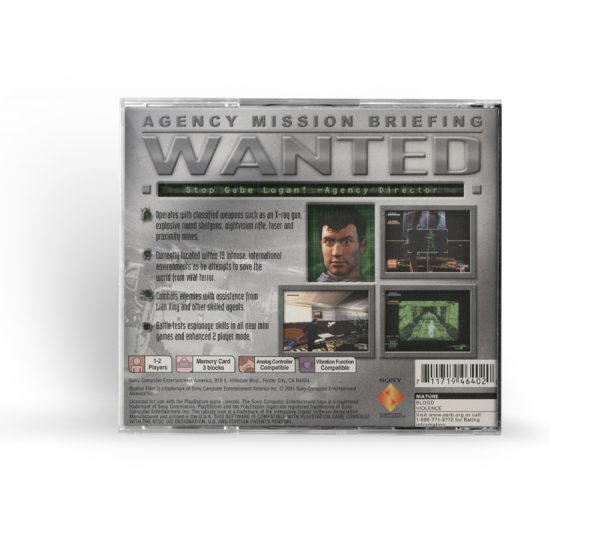 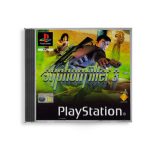 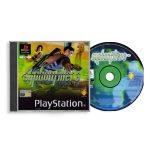 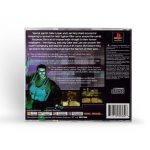 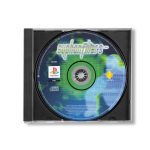 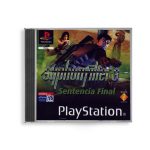 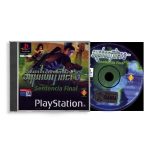 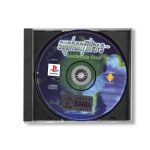 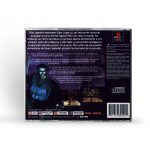 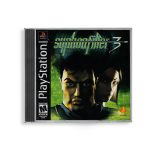 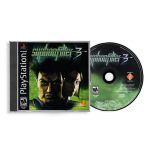 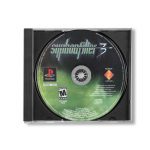 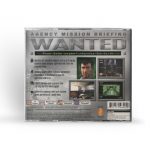 This a reproduction game, so you will get a new black high-quality CD-R (with colored silk-screen printing), in a new black jewel case, with colored covers on glossy cardboard, without manual, inside a new transparent film case.

PS: the PAL France, Germany, Italy & Spain versions are available, you have just to specify which one you prefer in your order.

Secretary of State Vince Hadden brings in Gabriel Logan, Lian Xing, and Lawrence Mujari to testify in Congress about their relationship to the Agency. He believes all three to be guilty, and questions them after they assassinate Shi-Hao from a hotel in Japan. The three do not realize that Hadden is involved in the conspiracy, and is looking for scapegoats.

Gabe begins by describing the first Syphon Filter investigation. He and Lian went to Costa Rica to find missing Agent Ellis. When they arrive, the two see that Erich Rhoemer has ordered Ellis killed, but Gabe must continue his mission and identify what Rhoemer was doing at the drug plantation. Gabe chases Rhoemer onto an airplane despite his Agency superior Edward Benton denying him permission. Gabe did not know back then that Benton and the Agency controlled Rhoemer, who escaped from the plane.

Mujari testifies next, and tells Hadden how he once worked for a resistance during the Apartheid era in South Africa. At the Pugari Gold Mine, he discovered that mining slaves had caught a deadly plague and the mine owners were covering it up. Mujari retrieved samples and gave them to Teresa Lipan.

When it’s Lian’s turn to testify, she details her first encounter with Gabe during the Soviet–Afghan War and her role in the Costa Rica operation. Meanwhile, Gabe goes to Ireland with MI6 agent Maggie Powers in an effort to scuttle a shipment of Syphon Filter, denying possession to the consortium and the local IRA cell. On board the S.S. Lorelei, Gabe plants several explosives and finds a document that will point to a virus test site in Australia. He also looks for any information on the mysterious arms consortium that controls the Agency. Gabe uncovers a mole in MI6, Nigel Cummings, who is aiding them. He kills Nigel and secures the last viral transport on the docks. The Lorelei is sunk with all hands lost.

Back in Washington, D.C., Gabe talks about his first meeting with Benton during the Soviet-Afghan conflict. Benton claimed to be a CIA agent transporting weapons to Afghans rebelling against the Soviets, but when Gabe and Ellis escorted the convoy, the Afghans attacked them. Gabe reaches Kabul and meets Lian, who sets up the diversion. However, a tank gets in their way, so Gabe destroys it. He learns that Benton was supplying arms to the Soviets, and was really an Agency operative.

As Hadden questions Gabe, Lian teams up with Maggie to abduct Dr. Elsa Weissenger from the Australian test site. Elsa is ready to betray the conspirators since Aramov left her behind, and she has Lian assemble a vaccine for aborigines held captive by Commander Silvers. Silvers plans to kill the test subjects, so Lian kills him first. When she returns to Elsa, Lian finds her gone.

Hadden accuses Gabe of lying and corruption. He believes Gabe murdered Teresa, but Teresa surprises him by appearing herself. Agency operative Jason Chance had only injured her, not killed. She describes her first meeting with Gabe during her time as an officer with the Bureau of Alcohol, Tobacco, and Firearms. A group of NSA agents headed by Colonel Silvers were posing as FBI to eradicate a private militia that had recovered data from a government satellite. Gabe, as an Agency operative, saved her life, and helped her when she rescued the wife and son of the militia leader. She left the ATF and joined the Agency.

Teresa faked her death to find the people behind the Agency. Her investigations into Aramov yielded a connection to Hadden himself. Before Gabe can apprehend him, Mara kills Hadden. She and several consortium terrorists take over the Senate building, but Gabe prevents her from detonating any explosives. He chases her onto a train full of hostages, and wounds her.

In a post-credits cutscene, Mara escapes despite being incarcerated. Gabe decides to find her, but for now the Syphon Filter crisis appears to be over with the death of Hadden. Gabe will become the new Agency director, and free it from corruption. Little does he know that an operation is ongoing near the S.S. Lorelei’s wreck site. People are recovering the viral crates, and Mara is heard laughing, setting the stage for Syphon Filter: The Omega Strain.

The game was originally slated for release on 25 September 2001. However, the fallout of the September 11 attacks forced Sony to postpone the release while modifying the marketing campaign. The game was released on 6 November. The game’s original cover had Gabe and Lian in action inside a courtroom that had a U.S. flag in the background amidst a swirl of gas. The anthrax scare following the attacks resulted in the cover being changed to a simple one showing Gabe and Lian’s faces, while the header line “United States Federal Bureau of Investigation” on the back cover was changed to “Agency Mission Briefing”.

Tommy Layton reviewed the PlayStation version of the game for Next Generation, rating it four stars out of five, and stated that “Graphically solid, slickly presented, and sporting a solid selection of mission types in a complex storyline, Syphon Filter 3 is perhaps the last great PSX action title.”

Be the first to review “Syphon Filter 3” Cancel reply