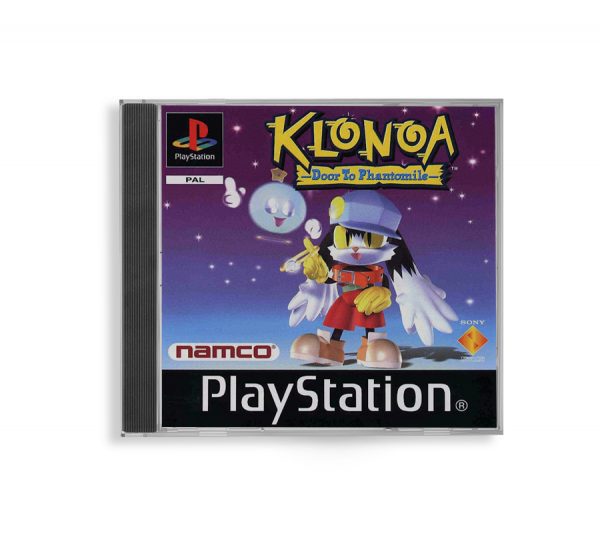 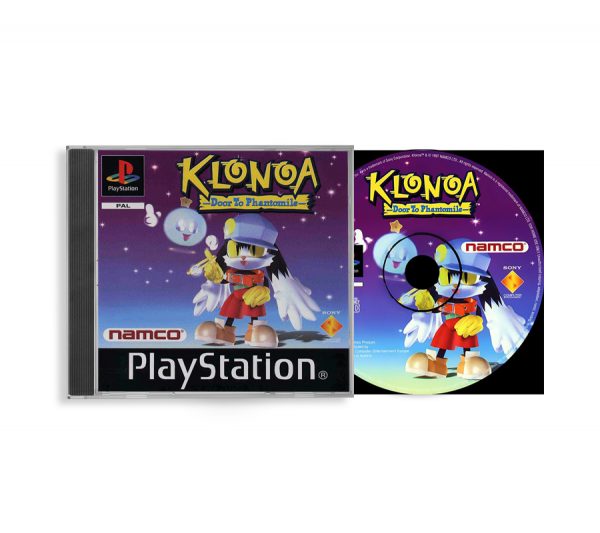 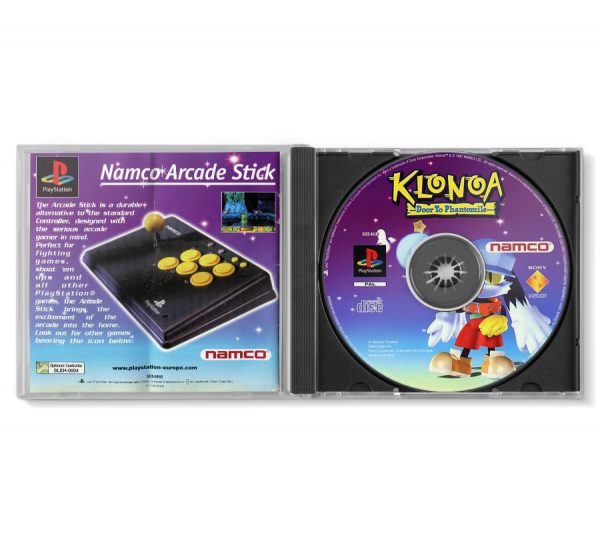 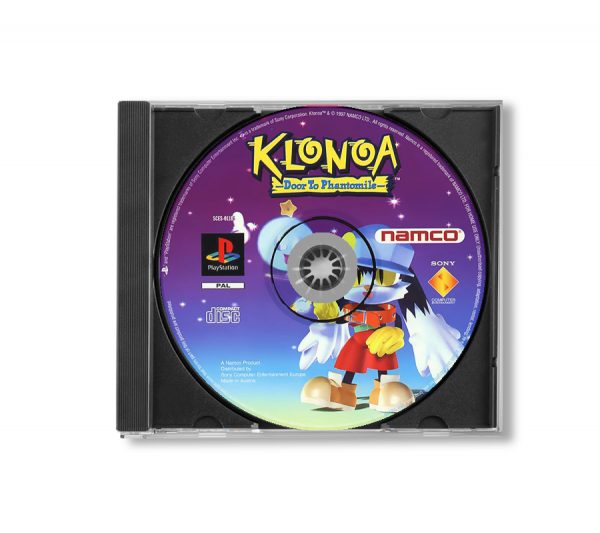 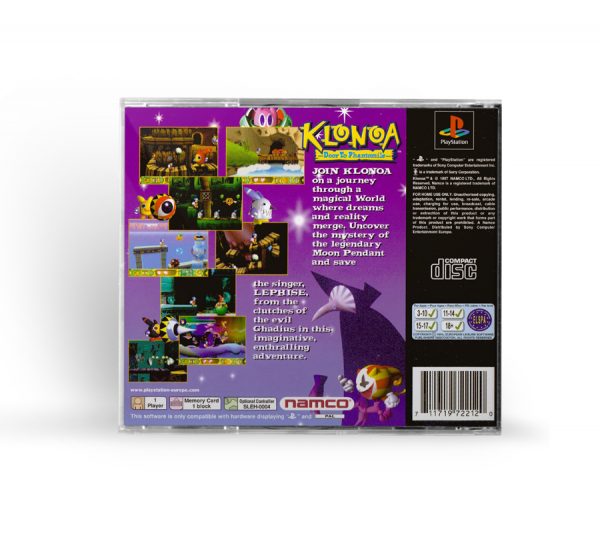 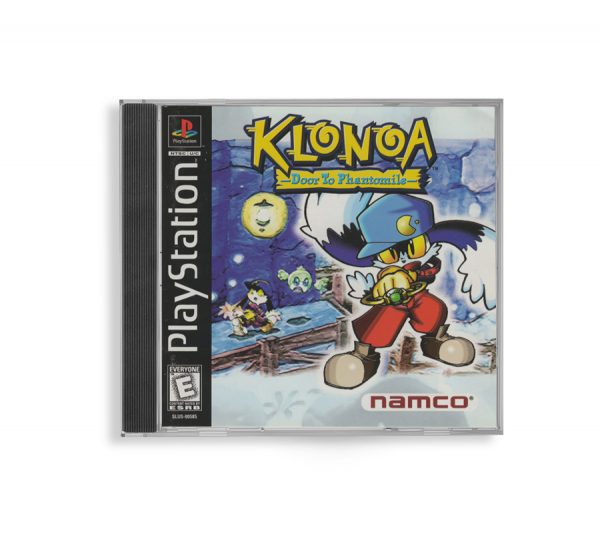 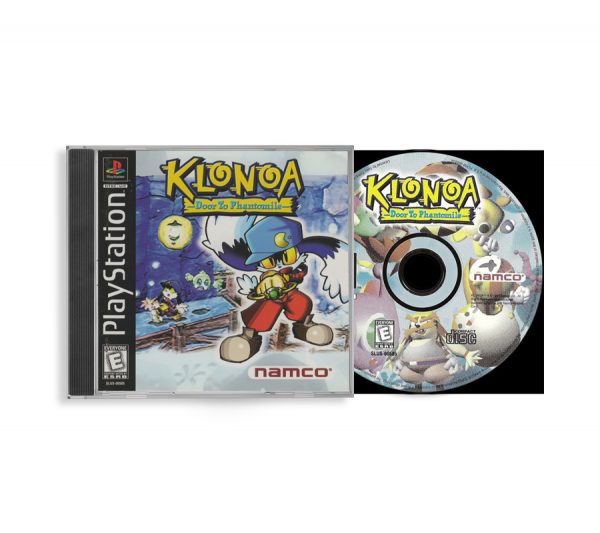 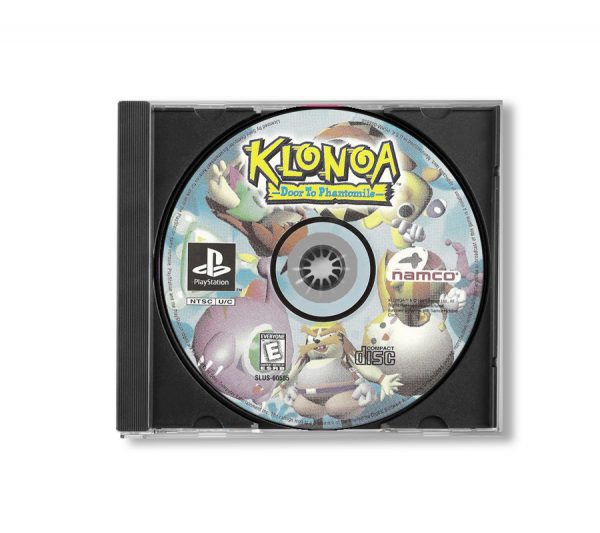 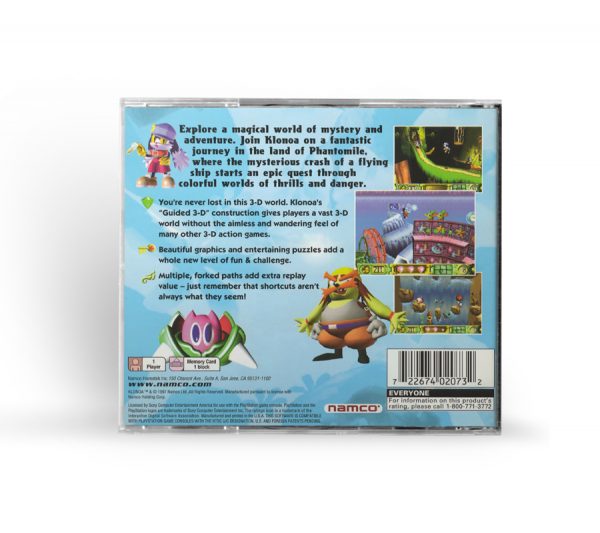 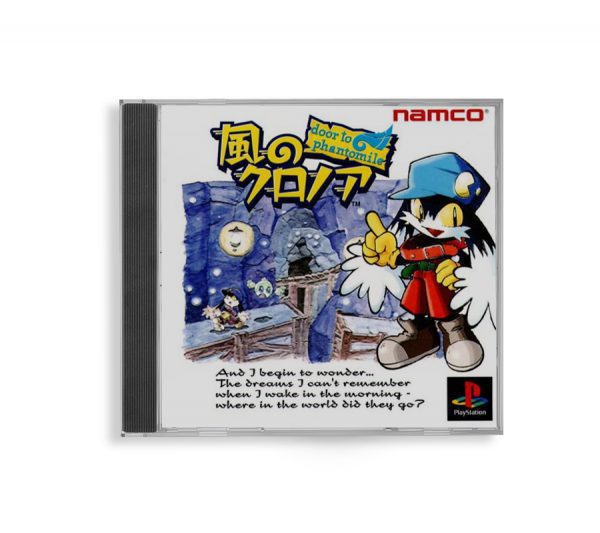 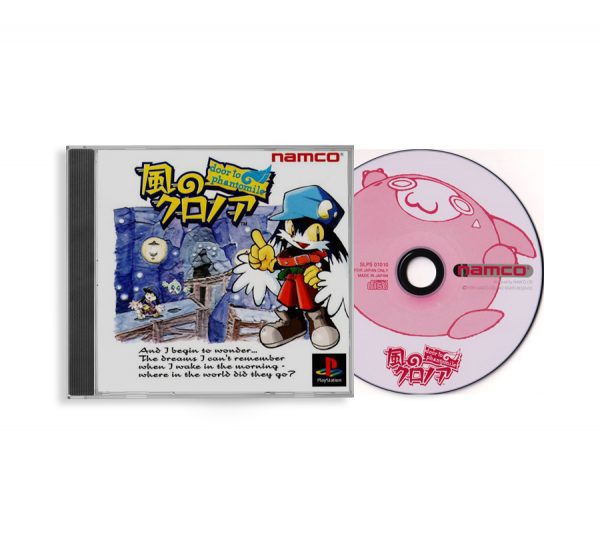 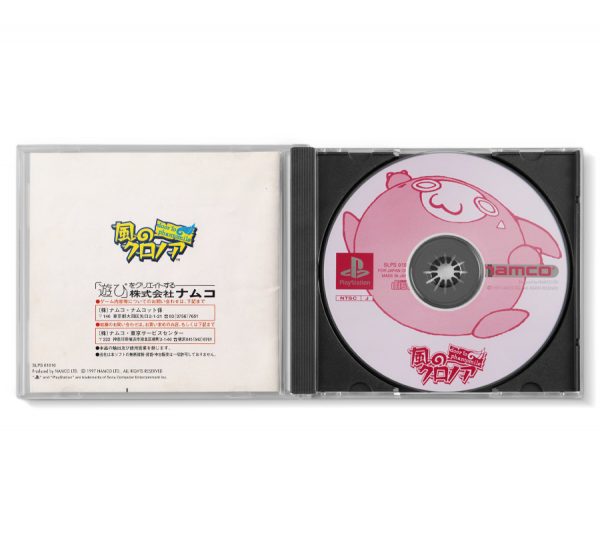 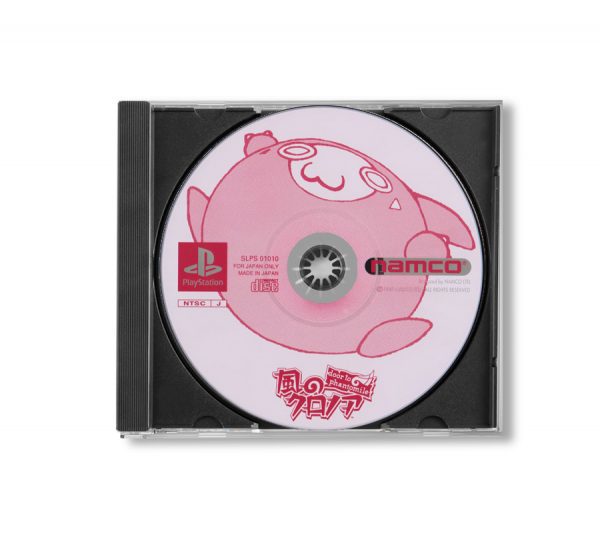 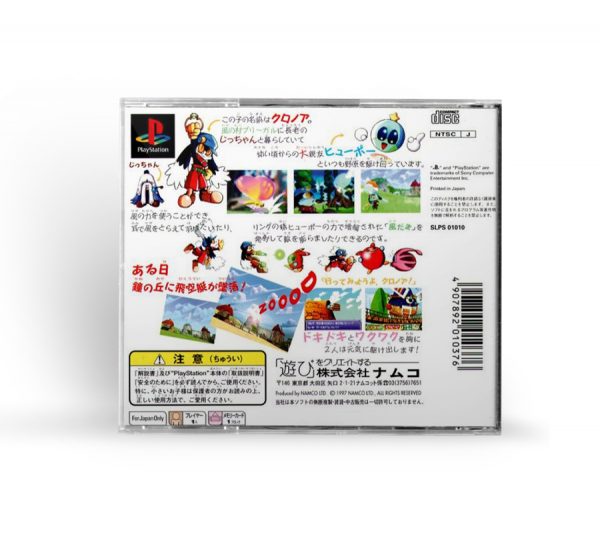 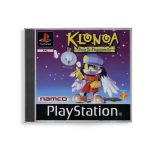 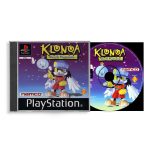 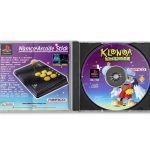 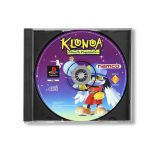 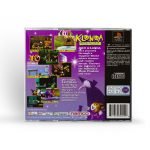 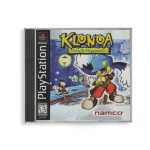 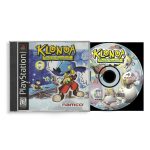 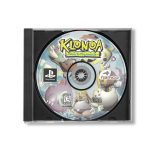 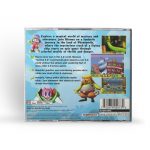 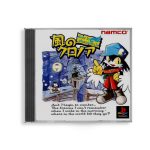 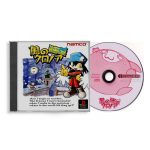 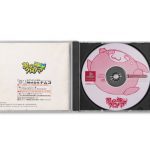 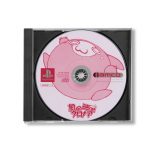 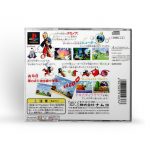 This a reproduction game, so you will get a new black high-quality CD-R (with colored silk-screen printing), in a new black jewel case, with colored covers on glossy cardboard, without manual, inside a new transparent film case.

PS: the PAL France, Germany, Italy & Spain versions are available, you have just to specify which one you prefer in your order.

Klonoa is a platform video game series created by Namco in 1997. It stars Klonoa, an anthropomorphic creature who explores dream worlds. The series includes two main games: Klonoa: Door to Phantomile (1997) for the PlayStation and Klonoa 2: Lunatea’s Veil (2001) for the PlayStation 2. A remake of Door to Phantomile was released for the Wii in 2008, and remasters of both games were released in 2022. The series also includes a set of handheld games released between 1999 and 2002 for the WonderSwan and Game Boy Advance.

The games are set in different worlds, though the primary and known ones are Phantomile and Lunatea. It revolves around Klonoa and how he, the Dream Traveler, must save whatever world he is in from peril. Along the way he makes new friends and enemies, some of them becoming recurring characters. The game is an early example of a side-scrolling 3D game. It is an adventure and puzzle type of game. The main gameplay feature involves using Klonoa’s ring and “Wind Bullets” to inflate enemies, which can be thrown at other objects or at the ground, giving him a boost upwards allowing him to double jump.

The series stars the titular character, Klonoa, who has features of a dog, cat, and rabbit but is not explicitly any particular animal. He is described within the games and manga as a “Dream Traveler”, who is fated to travel to various places where the state of dreams is in danger, but he himself is not aware of that. Voice acting for Klonoa in most appearances is provided by Kumiko Watanabe, although English dub performances have been provided by Eric Stitt in the Wii remake of Klonoa: Door to Phantomile, and by an uncredited voice actor in Klonoa Beach Volleyball. He has Namco’s mascot Pac-Man on the side of his blue hat. Wanting to be a hero, he is young and good-hearted and is willing to go against all odds to make sure justice is served. He is easily able to befriend characters along the way who support his cause. His attitude is innocent and even a bit naive, as shown in Klonoa 2: Lunatea’s Veil.

Klonoa was designed by Yoshihiko Arai. Arai’s first design, “Shady”, had a shadow-like appearance. However, he felt that the lack of color did not seem tasteful, and dropped the design. His next design was created with characteristically animal eyes and long ears, as Arai felt that a person’s eyes and silhouette are the features noticed when they are first met. He added a large hat with a Pac-Man emblem on it and collar to give the character a childlike and energetic quality. The design was kept and used for Klonoa.

The first entry in the series, Klonoa: Door to Phantomile (1997), was developed by published by Namco with director Hideo Yoshizawa. The Klonoa character and other game characters were designed by Yoshihiko Arai. The game released to a positive critical reception. Critics labeled it as Namco’s first notable 3D platformer and a bid for creating a gaming mascot. The game has been renowned for its blend of 2D gameplay with 3D visuals.

After Door to Phantomile, Namco developed two follow-ups simultaneously: Klonoa: Moonlight Museum (1999) for the WonderSwan, and Klonoa 2: Lunatea’s Veil (2001) for the PlayStation 2. Moonlight Museum was released exclusively in Japan, and set the design standards for future handheld Klonoa games. Lunatea’s Veil was released to critical acclaim but weak commercial performance.

Namco published three Klonoa games for the Game Boy Advance in the early 2000s. The first two, Klonoa: Empire of Dreams (2001) and Klonoa 2: Dream Champ Tournament (2002), are platform games which continued the 2D gameplay used in Moonlight Museum but with a new cast of supporting characters. The third game, Klonoa Heroes: Densetsu no Star Medal (2002) was an action role-playing game released exclusively in Japan. Also during this period, Namco published Klonoa Beach Volleyball (2002) in Japan and Europe.

With no home console release in the series since 2001, Namco sought to revive the franchise with Klonoa (2008) for the Wii, a remake of Door to Phantomile. The game featured revised graphics and voice acting, as well as new unlockable bonuses not in the original. Despite receiving positive reviews, the game was a commercial failure and plans for a remake of Lunatea’s Veil as well as a third main line installment were scrapped.

In September 2019, a trademark filing under the name Klonoa of the Wind Encore was discovered. Further trademark filings for Wahoo Encore and 1&2 Encore were discovered in September 2021. In December 2021, a trademark for Klonoa Phantasy Reverie Series was filed in the United Kingdom. Phantasy Reverie Series, which features remasters of the Wii version of Klonoa: Door to Phantomile and the original Klonoa 2: Lunatea’s Veil, was officially announced in a Nintendo Direct in February 2022, and was released in July for Nintendo Switch, Microsoft Windows, PlayStation 4, PlayStation 5, Xbox One and Xbox Series X/S. The game is titled Kaze no Klonoa 1&2 Encore in Japan, making it another entry in Bandai Namco’s Encore series of remakes.

The Klonoa series has been mostly critically well received. It was praised for its gameplay, graphics and story. It also received several awards including Lunatea’s Veil winning GameSpy‘s PlayStation 2 “Platform Game of the Year” in 2004.

From Wikipedia: The Free Encyclopedia
https://en.wikipedia.org/wiki/Klonoa

Be the first to review “Klonoa: Door to Phantomile” Cancel reply