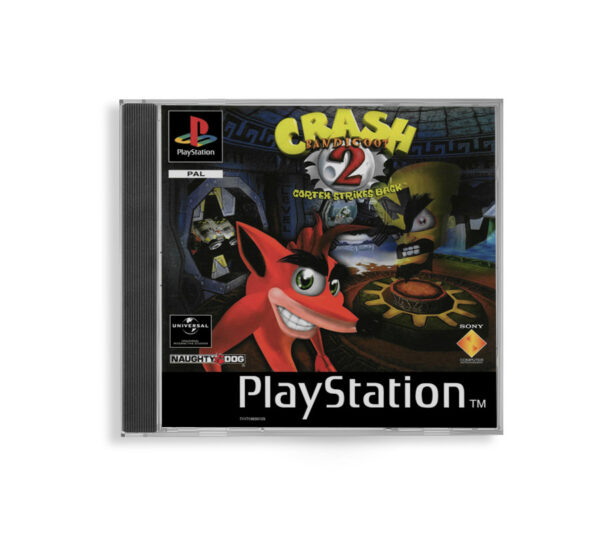 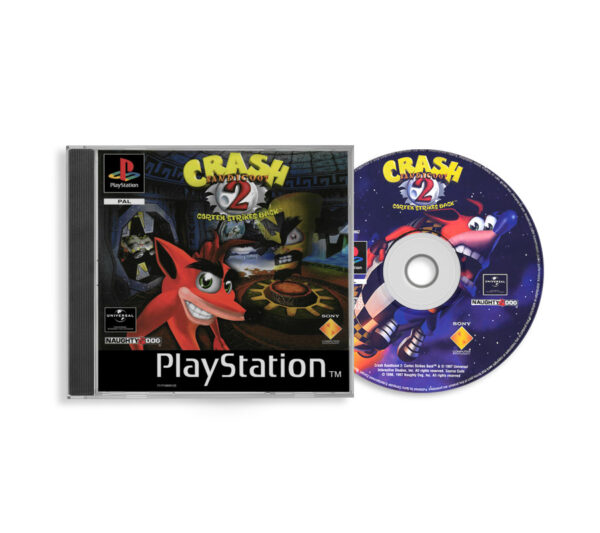 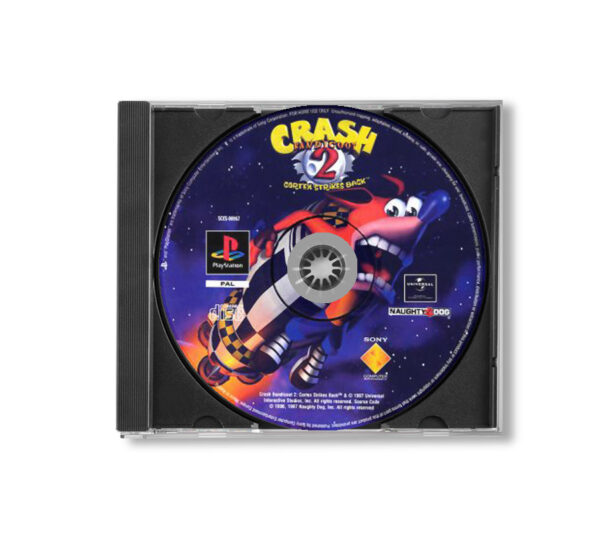 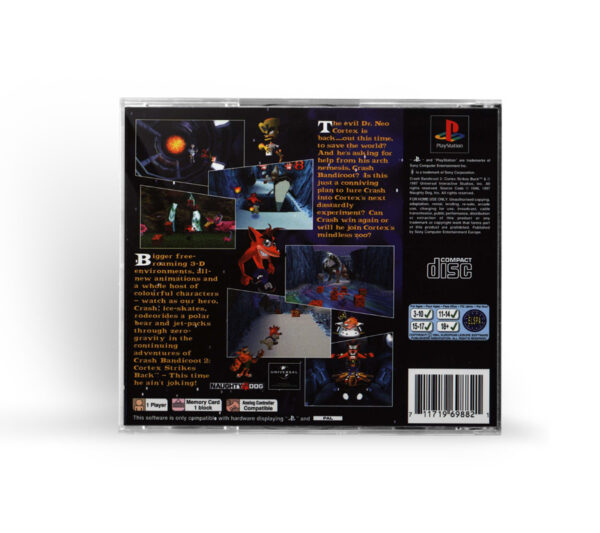 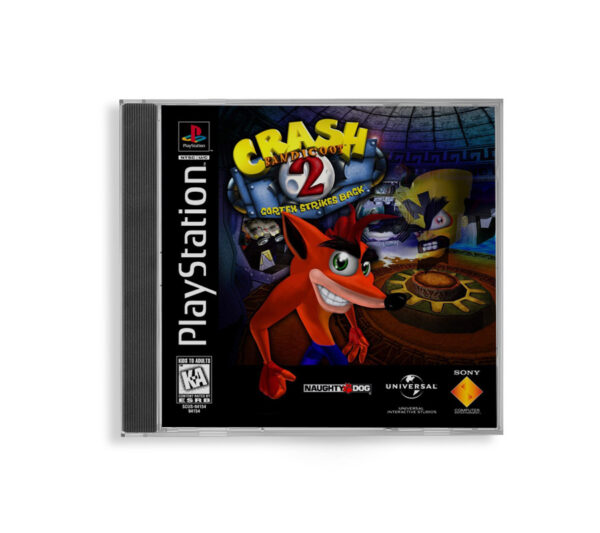 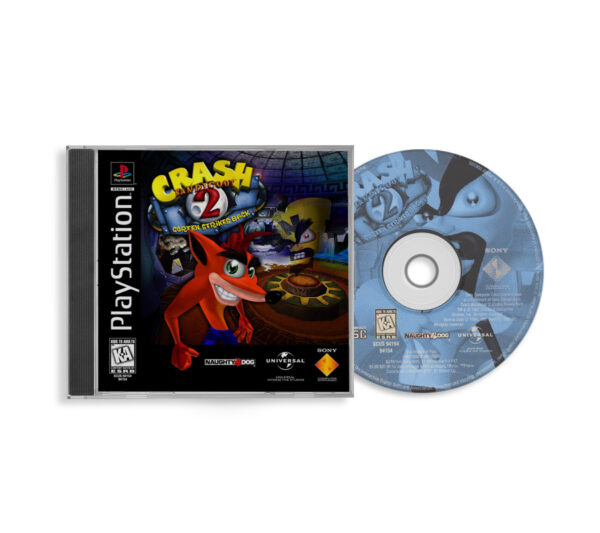 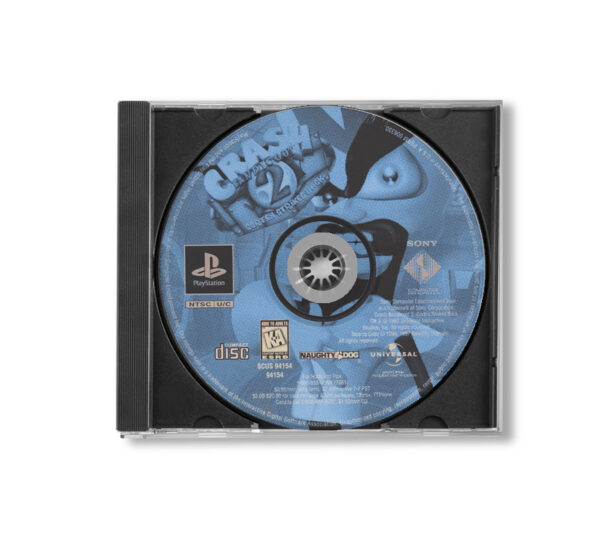 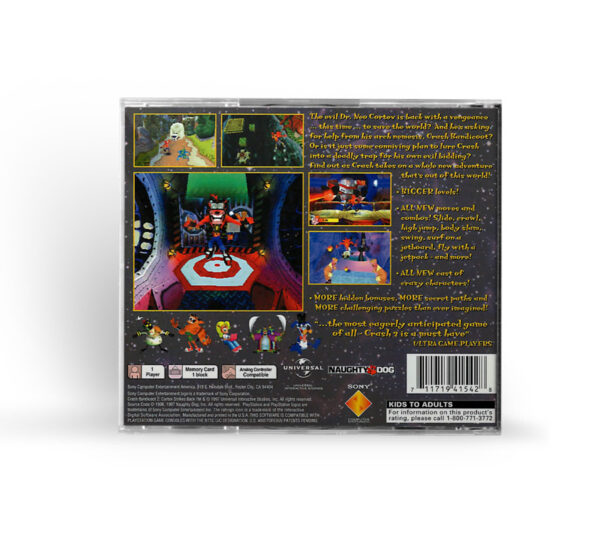 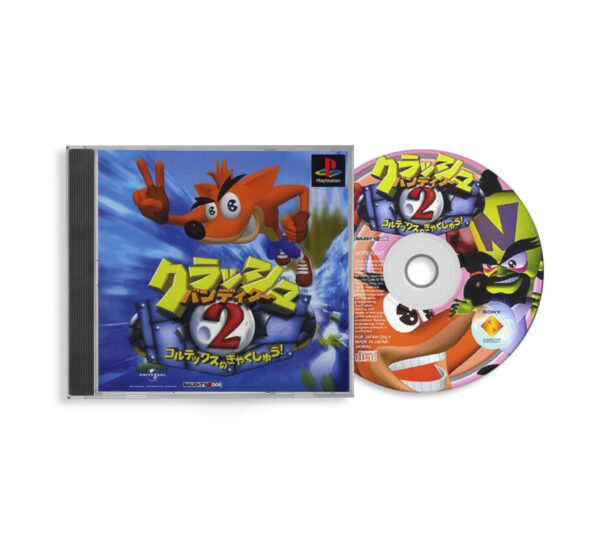 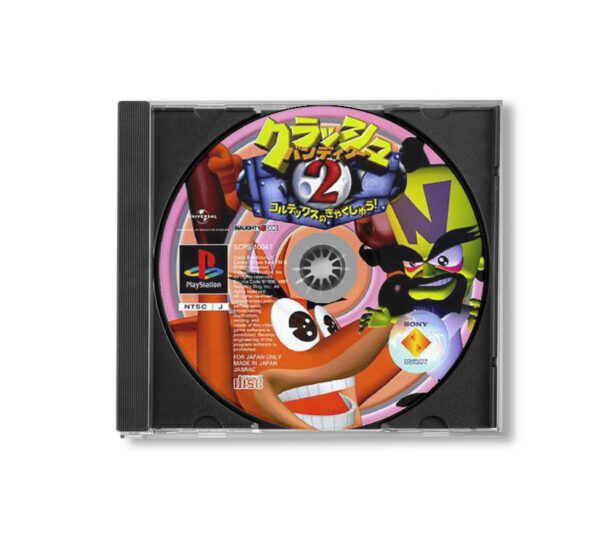 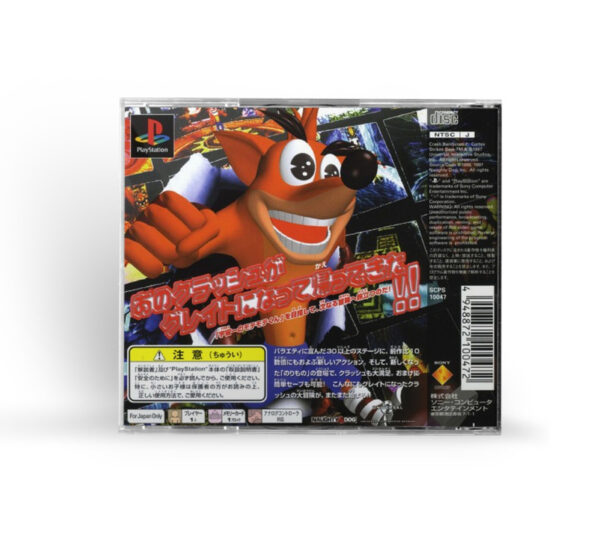 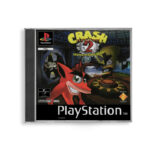 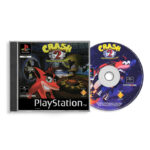 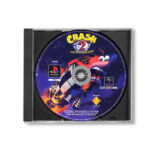 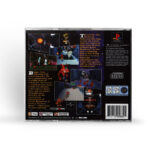 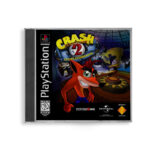 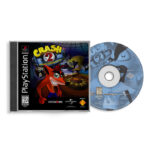 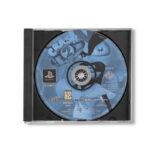 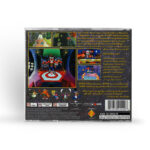 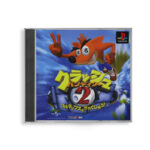 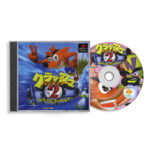 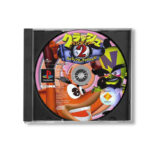 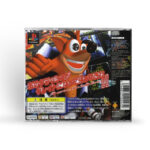 Crash Bandicoot 2: Cortex Strikes Back is a 1997 platform video game developed by Naughty Dog and published by Sony Computer Entertainment for the PlayStation. It is a sequel to Crash Bandicoot (1996), and is part of the series of the same name.

Taking place on a fictional group of islands near Australia, Crash Bandicoot 2 follows the adventures of the anthropomorphic bandicoot Crash. Crash is abducted by series villain Doctor Neo Cortex, who tricks him into thinking he wants to save the world. Crash is thrust into several parts of N. Sanity Island in order to gather Crystals that will allow Cortex to contain the power of an upcoming planetary alignment and keep the planet from being destroyed. Crash’s sister Coco and Cortex’s former assistant Doctor Nitrus Brio try to warn him about Cortex, with the latter urging Crash to gather gems instead of crystals.

Cortex Strikes Back received positive reviews from critics and is widely considered to be superior to its predecessor. Much of the praise went to the game’s graphics, controls and music, while criticisms focused on the trial-and-error gameplay, lack of level variety, easy boss levels and lack of innovation as a platform game. The game went on to become one of the best-selling PlayStation video games of all time and replaced its predecessor as the highest-selling Western title in Japan at the time, selling more than 800,000 copies in the country by April 1998. A remastered version was included in the Crash Bandicoot N. Sane Trilogy collection, released on the PlayStation 4 in June 2017, and ported to other platforms in June 2018.

Gameplay
Cortex Strikes Back is a platform game in which the player character is the titular Crash Bandicoot. The goal of the game is to gather 25 crystals for Crash’s nemesis Doctor Neo Cortex. The crystals are scattered between 25 different levels, accessible via “Warp Rooms”, which are hub areas of the game. A level is cleared by collecting its respective crystal and reaching the end of its path, which returns Crash to the Warp Room. Each Warp Room contains five levels. When all five levels are cleared, the player must defeat a boss character before gaining access to the next Warp Room. The player is given a certain amount of lives, which are lost when Crash is attacked by an enemy, or falls into water or a pit. If the player runs out of lives, the game is over. However, it can be continued by selecting “Yes” at the “Continue?” screen.

Crash has the ability to jump into the air and land on an enemy character, spin in a tornado-like fashion to knock enemies off-screen, slide across the ground, and perform a body slam to break certain objects. Crash can jump higher than he normally can if he jumps immediately following a slide. All of these techniques can be used as offensive measures against most enemies, who serve to deter Crash’s progress. Enemies with deadly topsides cannot be jumped on, while enemies that attack from the front or have side spikes must be jumped on or undergo a body slam. Enemies with sharp necklines (such as frill-necked lizards or long-legged robots with heated circumferences) can only be defeated if Crash slides into them.

Boxes play a prominent role in Cortex Strikes Back and can be broken with all of Crash’s techniques. Most boxes in the game contain “Wumpa Fruit”, which give the player an extra life if 100 of them are collected. Some boxes contain a Witch Doctor’s Mask, which shields Crash from one enemy’s attack while it is in his possession. If three masks are collected in a row, Crash is given temporary invulnerability from all minor dangers. If jumped upon, boxes with arrows pointing up propel Crash further into the air than he can ordinarily reach, and such boxes can be broken only with Crash’s spin attack. Boxes with an exclamation mark (!) on them cause previously intangible objects in the area to solidify. TNT Boxes explode after a three-second fuse when jumped on, while Nitro Boxes explode upon any physical contact. All of the Nitro Boxes in a level can be detonated at once if a green-colored box with an exclamation mark (!) on it is touched. Checkpoint boxes allow Crash to return to the point where the first checkpoint box has been opened upon losing a life. If more than one checkpoint box has been opened in a stage, Crash returns to the last checkpoint box that has been opened. The player will earn a gem if they manage to destroy all the boxes, including Nitro Boxes and boxes on alternate routes, in a level. Certain gems can be acquired by other means, like reaching the end of a level within a certain time parameter, or completing a level without breaking any boxes.

“Bonus Paths”, signified by platforms with a question mark on them, lead Crash to a secret region of the level. In these areas, numerous Wumpa Fruit and extra lives can be collected if the player successfully navigates to the end of the path. If Crash falls off-screen or is otherwise killed off, the player loses whatever was collected in the Bonus Path and is returned to the level from which the Bonus Path was accessed, keeping all lives the player had previously collected.

From Wikipedia: The Free Encyclopedia
https://en.wikipedia.org/wiki/Crash_Bandicoot_2:_Cortex_Strikes_Back

Be the first to review “Crash Bandicoot 2: Cortex Strikes Back” Cancel reply