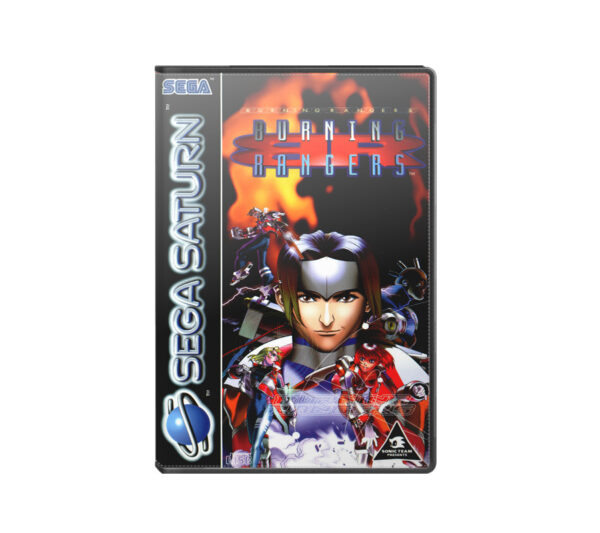 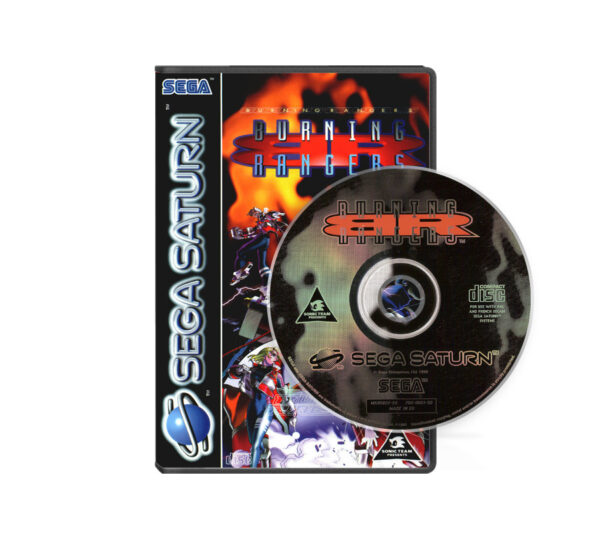 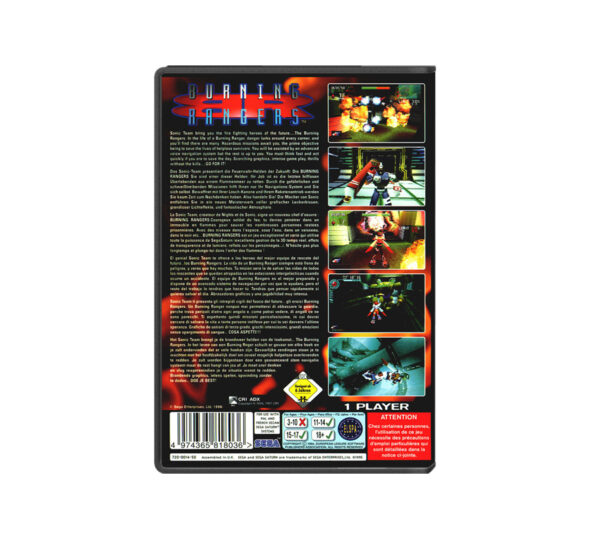 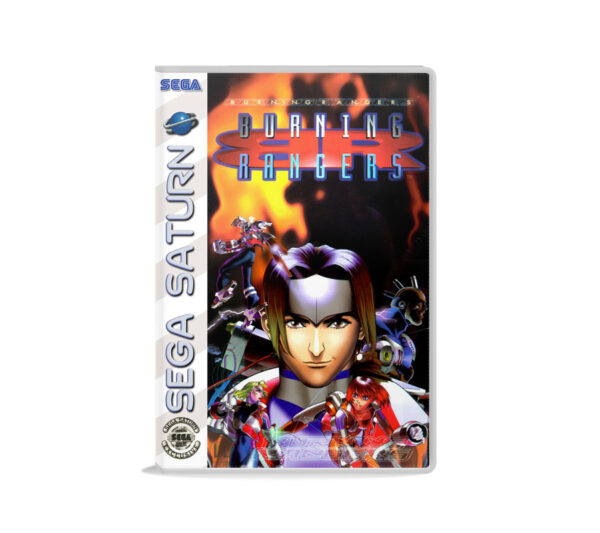 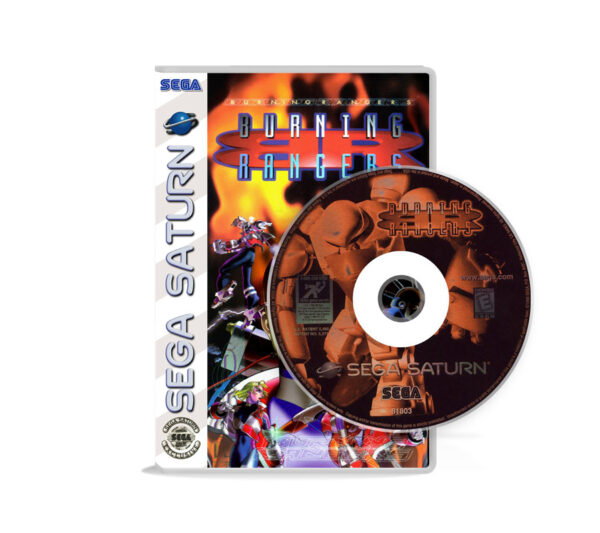 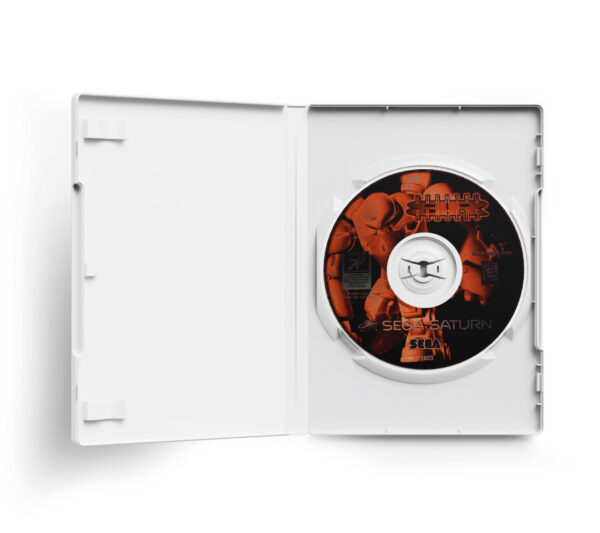 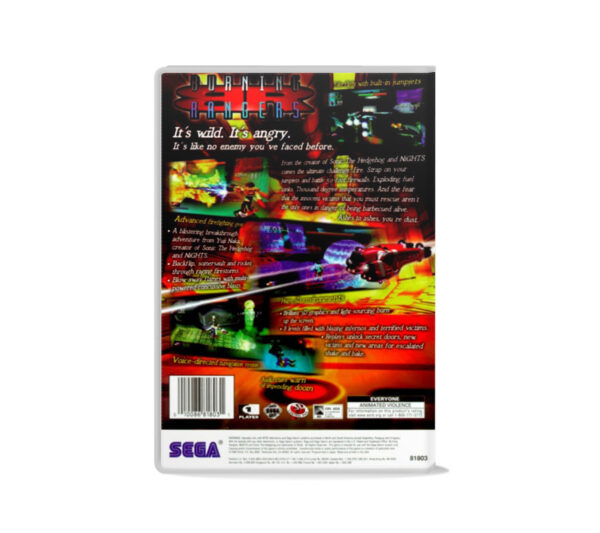 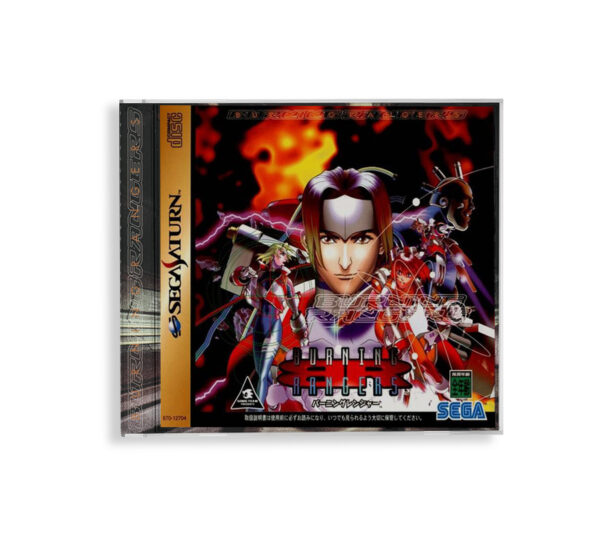 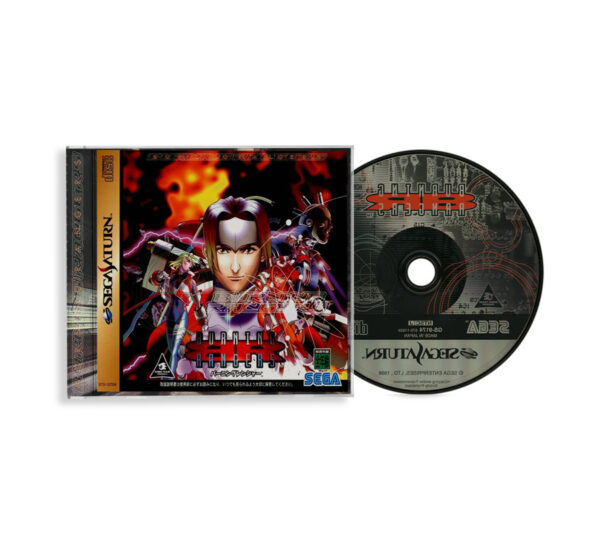 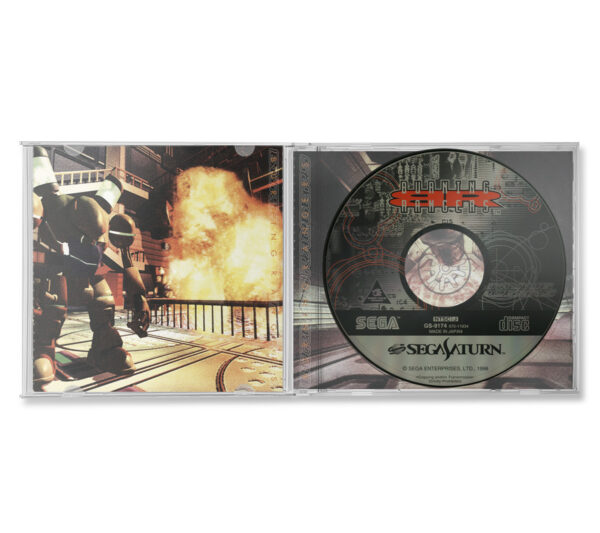 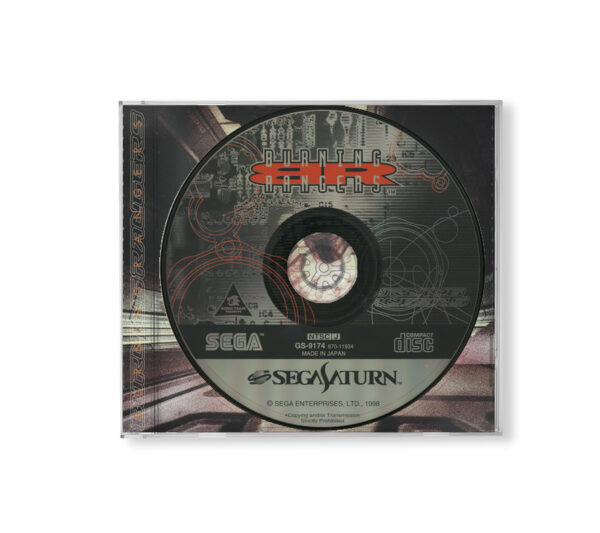 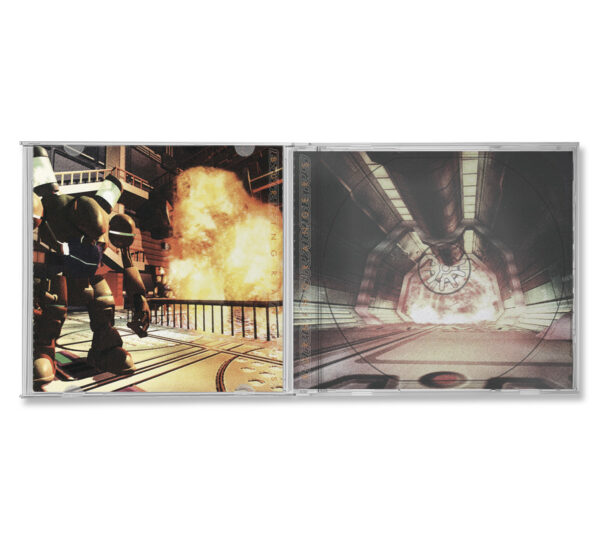 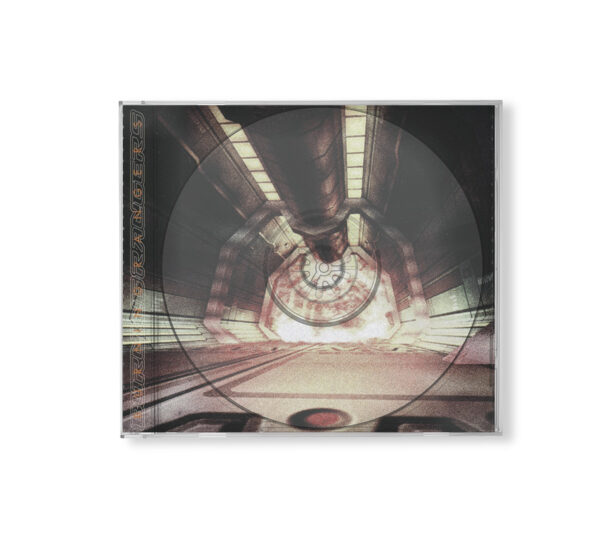 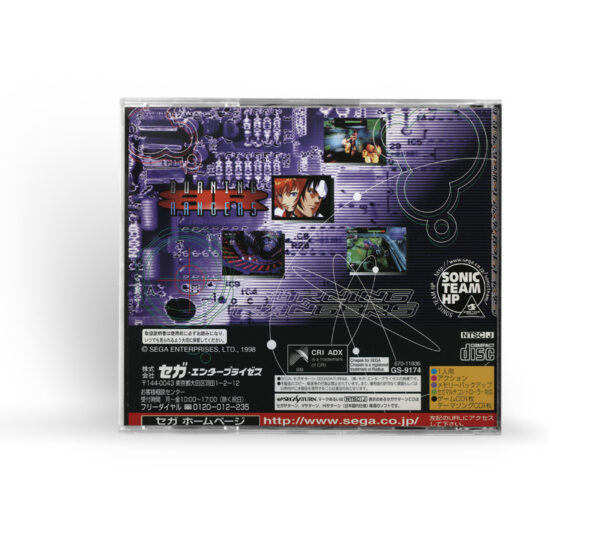 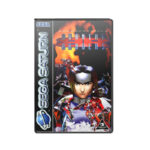 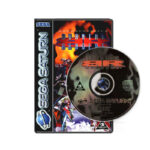 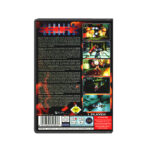 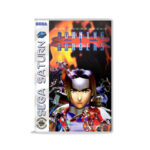 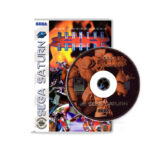 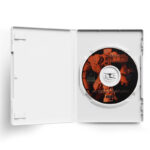 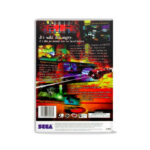 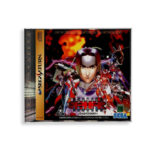 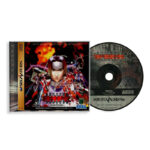 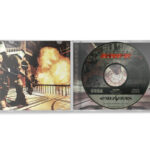 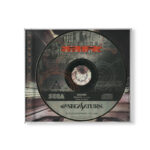 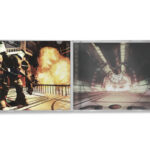 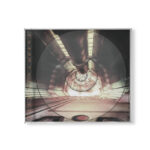 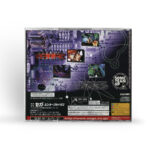 This a reproduction game, so you will get a new high-quality CD-R (with colored silk-screen printing), in a new black or white Blue Ray/ DVD case, or in a black (it depends on the region of origin) jewel case (inside a new transparent film case), with colored covers on glossy cardboard, without manual.

Burning Rangers is a 1998 action game developed by Sonic Team and published by Sega for the Sega Saturn. Burning Rangers is set in a futuristic society in which fire is the remaining danger. Players control one of an elite group of firefighters, the Burning Rangers, who extinguish fires and rescue civilians in burning buildings. Most of the tasks the players complete are centred around collecting energy crystals to transport civilians to safety. In lieu of an in-game map, Burning Rangers features a voice navigation system which directs players through corridors.

Development began shortly after the release of Christmas Nights in November 1996. Producer Yuji Naka wanted to create a game which involved saving people rather than killing them. Sonic Team chose to connect the game with firefighting as they thought it was an effective way of having players identify with heroism. It was released in Japan in February 1998, and later that year in North America in May and in Europe in June. Burning Rangers received mostly positive reviews. Critics unanimously commended the game’s soundtrack and audio, with the voice navigation system receiving particular praise. The response to the graphics was mixed, with some critics feeling they were among the best on the Saturn, although it was noted for its poor collision detection and occasional glitching. The game was among the final five Saturn games released in America.

Burning Rangers is a third-person shooter game in which players complete missions involving extinguishing fires and rescuing civilians. The game is set in a futuristic society in which fire is the only danger, and stars an elite group of firefighters, the Burning Rangers. The player assumes control of one of two apprentice rangers, and completes tasks across the game’s four levels. The primary objective is to transport stranded civilians from burning buildings, by collecting energy crystals dropped from extinguished fires. A minimum of five crystals are needed to transport a civilian to safety; the player receives an energy shield if they use ten. The crystals function similarly to rings in Sonic the Hedgehog games: possessing at least one crystal allows a player to survive damage from an enemy or fire. Being hit once scatters the player’s crystals and renders them vulnerable to death.

The game’s four stages take place in a power plant, underwater habitat, space station and spaceship in zero gravity, respectively. Every level is an interior space, and consists of multi-storied rooms and corridors divided by interlocking lifts and doors. The player is equipped with a jet pack to reach higher areas and perform acrobatic maneuvers such as backflips and rolls. They can also swim and dive underwater. Robot attack the player with shooting flames should they come into contact. Each stage ends with a boss battle, ranging from fire-breathing flowers to robotic fish.

Since there is no in-game map, the player character relies on a voice navigation system to find their way. The mission controller gives the player directions depending on their location, which can be repeated at any time. At the end of each stage, the player receives a rank based on their score and success at putting out fires, with “S” the highest and “D” the lowest. Once the game is completed, a random generator mode is unlocked which mixes up the order of corridors in the game’s four stages, with a potential total of 3,125 unique routes.

Burning Rangers takes place on a futuristic Earth where the only threat to human life is from fires. A team of fire-fighters called Burning Rangers are dispatched to emergency incidents to fight fires and rescue people in danger. The player is given the choice of two playable characters, Shou Amabane and Tillis. The selected character is first taken through a tutorial stage where they are introduced to the other members of the team, Chris Parton, Reed Phoenix, Big Landman and the non-selected playable character, before being taken on missions. During the final mission, the Rangers are introduced to Iria Klein, a girl placed in suspended animation and sent into space after contracting an incurable disease. Iria informs the Rangers her ship is set to crash into Earth, causing complete devastation, so the Rangers devise a plan to stop the ship and rescue Iria. Shou and Tillis become fully fledged Rangers, and Iria is cured of her disease and settles into her new life on Earth as a member of the Burning Rangers.

From Wikipedia: The Free Encyclopedia
https://en.wikipedia.org/wiki/Burning_Rangers

Be the first to review “Burning Rangers” Cancel reply