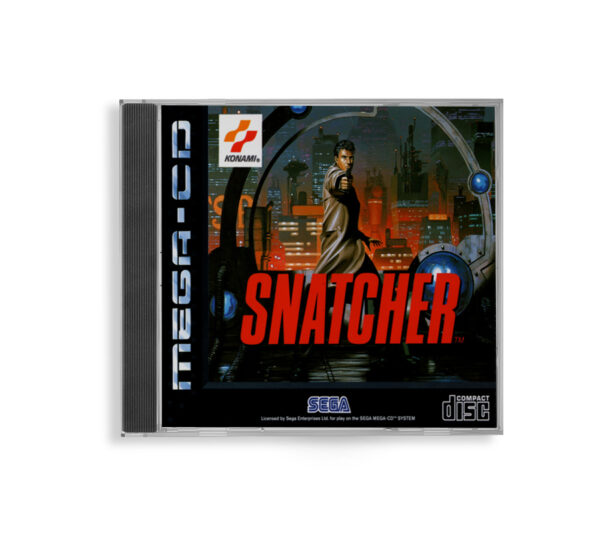 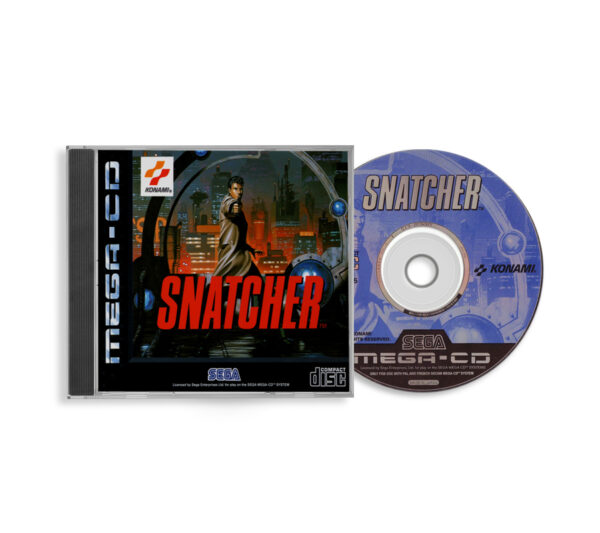 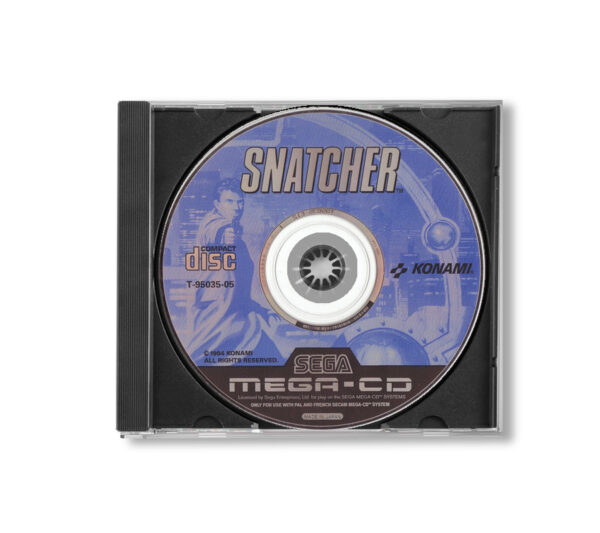 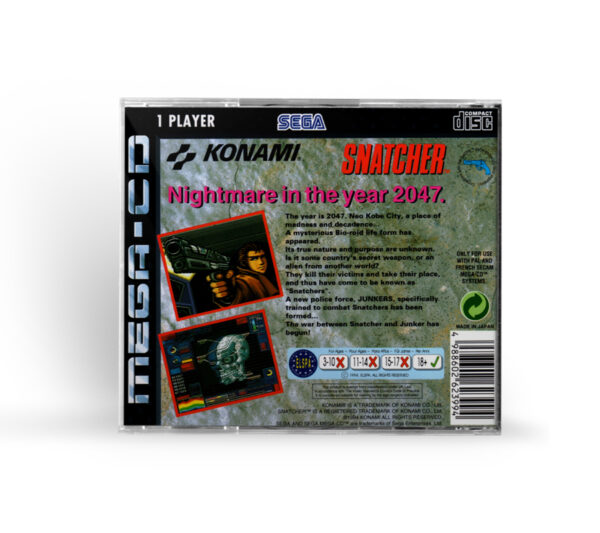 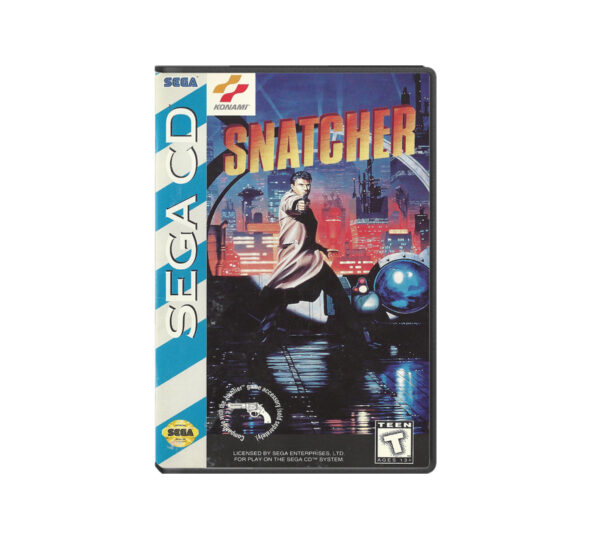 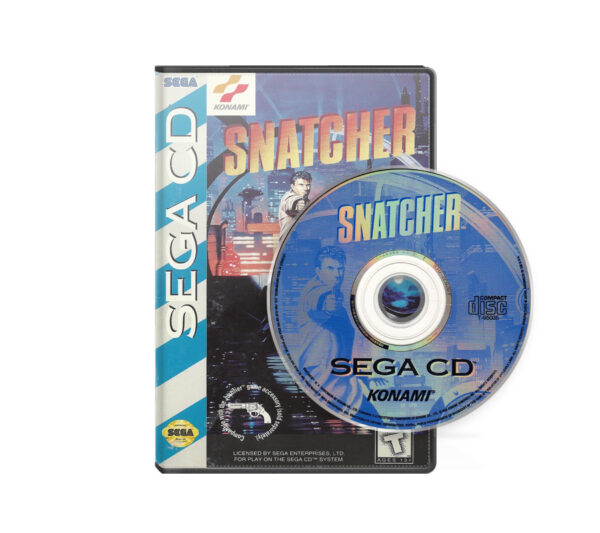 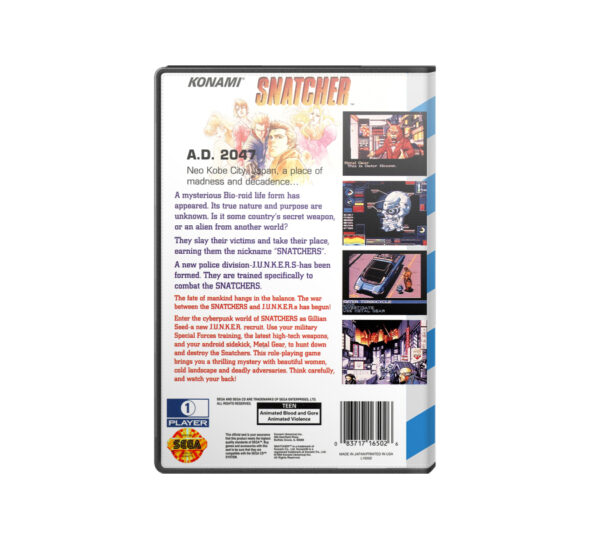 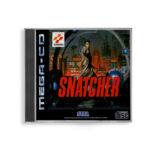 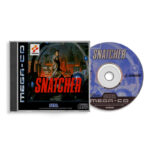 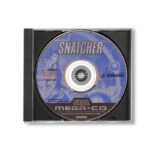 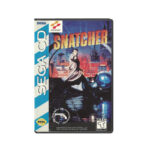 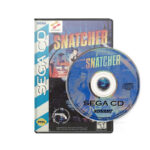 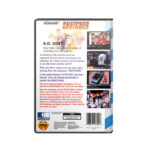 This a reproduction game, so you will get a new high-quality CD-R (with colored silk-screen printing), in a new black jewel case (inside a new transparent film case), or in a new black DVD/ Blue Ray box (depending on the region of origin) with colored covers on glossy cardboard, without manual.

Snatcher is a cyberpunk graphic adventure game developed and published by Konami. It was written and designed by Hideo Kojima and first released in 1988 for the PC-8801 and MSX2 in Japan. Snatcher is set in a future East Asian metropolis where humanoid robots dubbed “Snatchers” have been discovered killing humans and replacing them in society. The game follows an amnesiac member, who joins a Snatcher hunting agency in search of his past. Gameplay takes place primarily through a menu-based interface through which the player can choose to examine items, search rooms, speak to characters, explore a semi-open world, and perform other actions.

Kojima wanted Snatcher to have a cinematic feel, so the setting and story are heavily influenced by science fiction films, like Blade Runner, Akira and The Terminator. Development on the PC versions took more than twice as long as the average game of the time, even after Kojima was asked to trim more than half his initial story. The game was released to positive reviews, but poor sales. It garnered a cult following, and was remade as a role-playing game called SD Snatcher for the MSX2 in 1990. This was followed by a remake of the original adventure game using CD-ROM technology, released for the PC Engine Super CD-ROM² System in 1992.

Looking to provide a more interactive experience to gamers in the West, Konami developed a Sega CD version of Snatcher specifically for North America and Europe in 1994. Although it too was released to a poor commercial reception, the Sega CD version received mostly positive reviews for its cinematic presentation and mature themes uncommon in games at the time. Snatcher has been retrospectively acclaimed as both one of the best adventure and cyberpunk games of all time, and identified as a foundation for the themes Kojima explored later in the Metal Gear series. The game was a significant inspiration on Goichi Suda, who worked with Kojima to produce a radio drama prequel, Sdatcher. The English version of Snatcher has never been rereleased, despite desire from fans.

Gameplay
Snatcher is a graphic adventure game with visual novel elements. The player controls Gillian Seed as he investigates and hunts “Snatchers”, dangerous humanoid robots disguised as humans roaming Neo Kobe City. The game’s visuals are static images with some animations that display at the top of the screen. There is no point-and-click interface, with all actions made through a text menu with commands such as move, look, and investigate. The game’s puzzles and dialogue trees are simple, lending to an emphasis on linear storytelling. Sometimes character panels are shown below the main graphics window during conversations to convey their facial expressions.

The game allows exploration of a semi-open world. There are a handful of action segments where the player shoots at enemies dispersed across a 3×3 grid. The Sega CD version supports the Justifier light gun packaged with Lethal Enforcers for these segments.

Sega CD
After releasing its first game on the Sega CD, Lethal Enforcers (1992), Konami wanted to bring a more interactive experience to the system for Western players. It considered making a game in full motion video like Night Trap (1992) but thought it may be too difficult, and ultimately decided to localize and port Snatcher. This also gave the Snatcher developers an opportunity to improve upon the PC Engine version which they were still not completely satisfied with. Although the Sega CD could only display 64 colors simultaneously (compared to the PC Engine’s 256), the team used software techniques to increase this to 112 and modified some of the palettes to compromise.

Several scenes were censored or otherwise altered for the Sega CD release. The breasts of the deceased Lisa Nielsen Snatcher were covered up, while the sequence in which Katrina Gibson is shown standing naked in a shower was obscured, and Katrina’s age was changed from 14 to 18. Some options that allowed Gillian to engage in sexual behaviors were removed or toned down, such as those that allowed him to sniff panties or stare at breasts. Audio in which a robot becomes aroused while watching a pornographic film was cut out entirely. The violence was not altered, except for one scene where a partially dead dog with twitching innards was made completely dead with no twitching. Fearing copyright issues in the United States, the clientele in a bar was changed from Kamen Rider, the Alien, and other characters to Konami characters. Feeling that the third act was too movie-like, Konami added more interactivity through additional forks and choices. Additionally, the player is now graded on how well they solved the mysteries. Dates of events in the game were also moved up five years to still occur in the near future to compensate for the late release.

The game was translated by Scott Hards, with supervision from Jeremy Blaustein and Konami of Japan. The translation took about two to three months. Seven voice actors recorded about two and a half hours of dialogue for 26 different characters. With the large amount of text included in the game, the translation was expensive, and Konami felt it was the most difficult part of the porting process. According to Blaustein, Kojima was not involved with the Sega CD port, likely working on Policenauts at the time.

Snatcher was released in December 1994 in Europe and January 1995 in North America. According to Blaustein, it only sold a couple thousand copies in the United States and was ultimately a commercial failure. Its poor sales have been attributed to its late release during the Sega CD’s lifespan.

From Wikipedia: The Free Encyclopedia
https://en.wikipedia.org/wiki/Snatcher_(video_game)

Be the first to review “Snatcher” Cancel reply