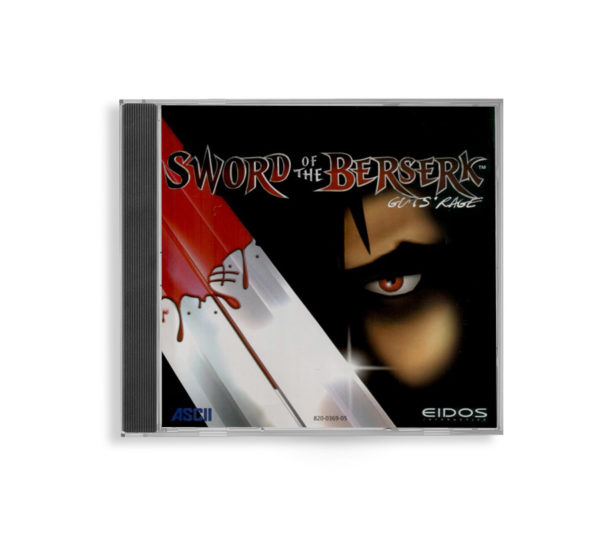 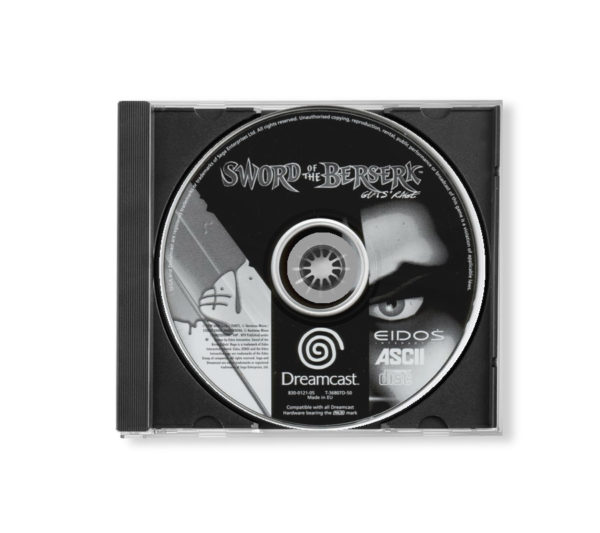 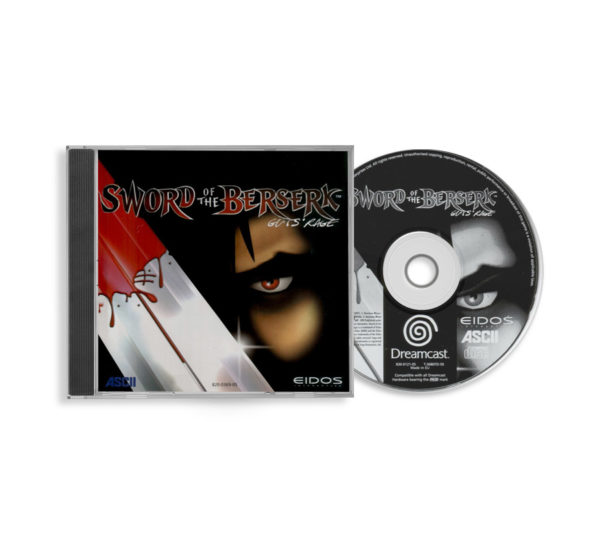 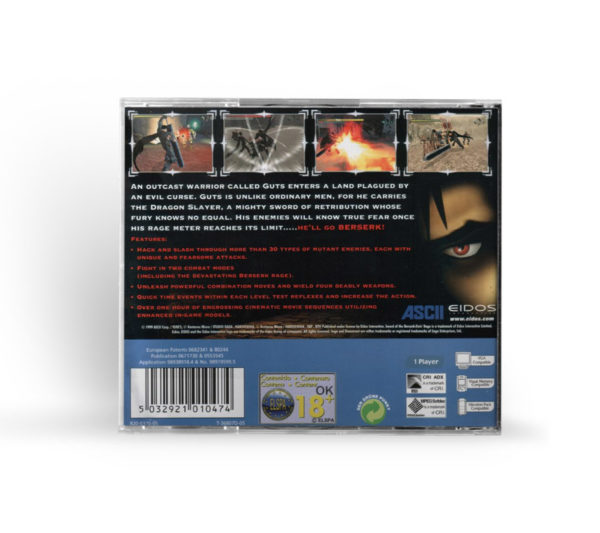 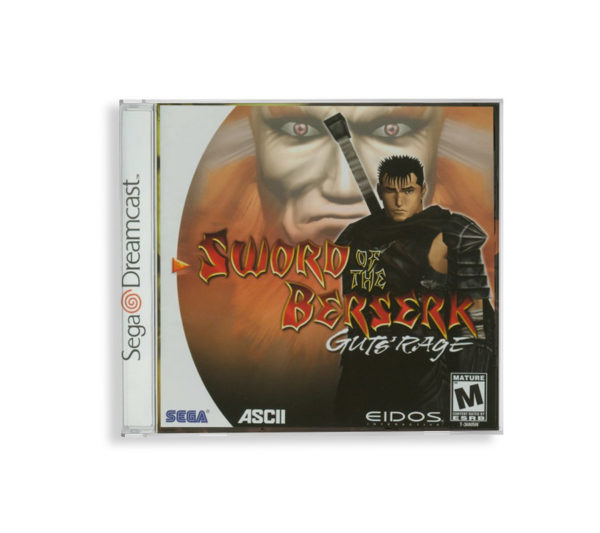 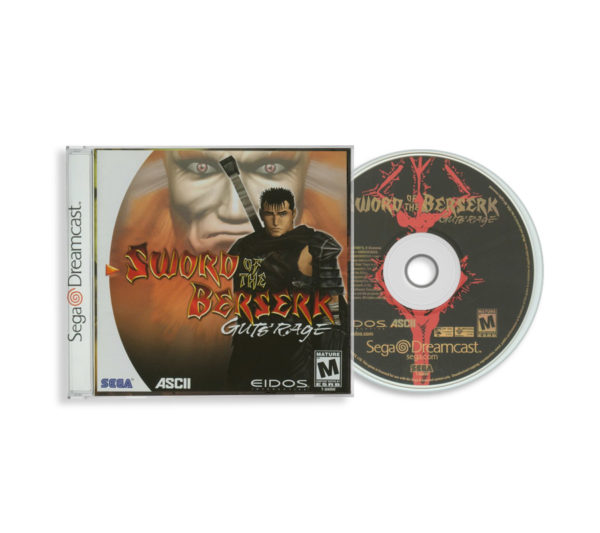 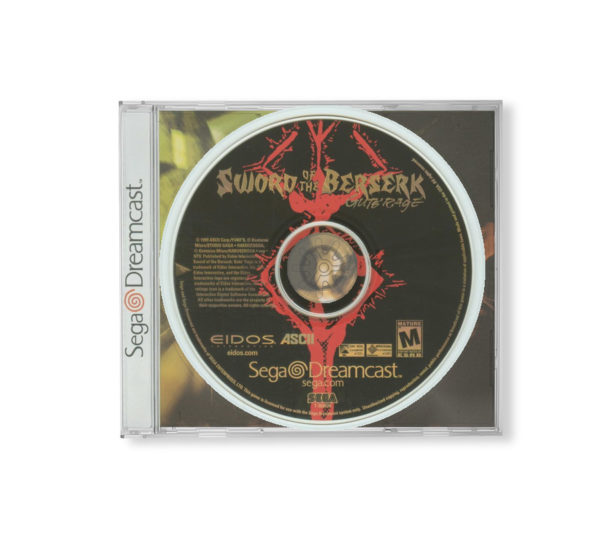 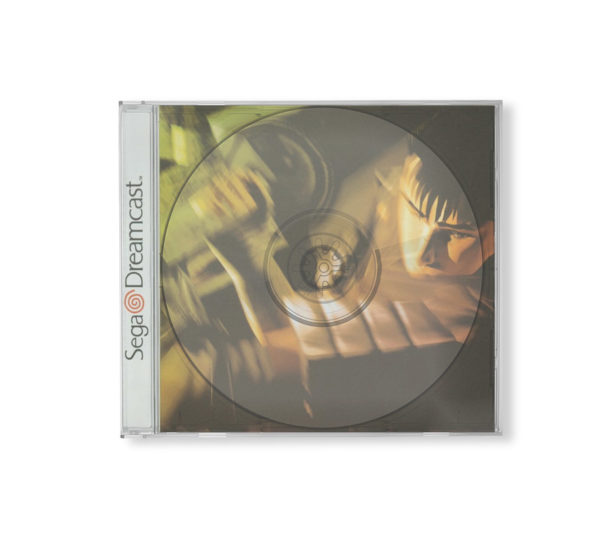 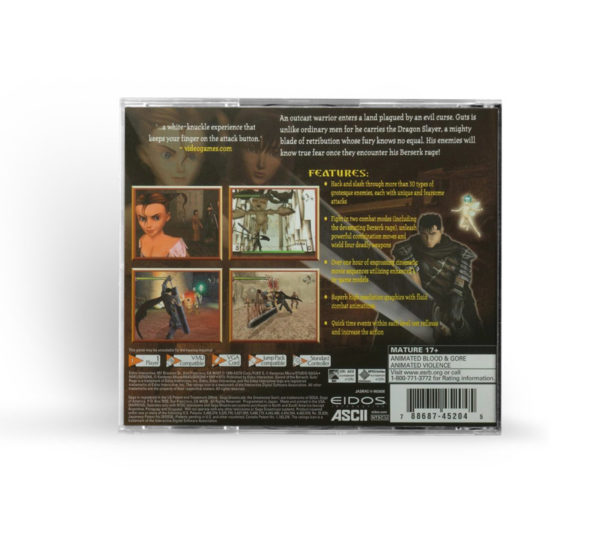 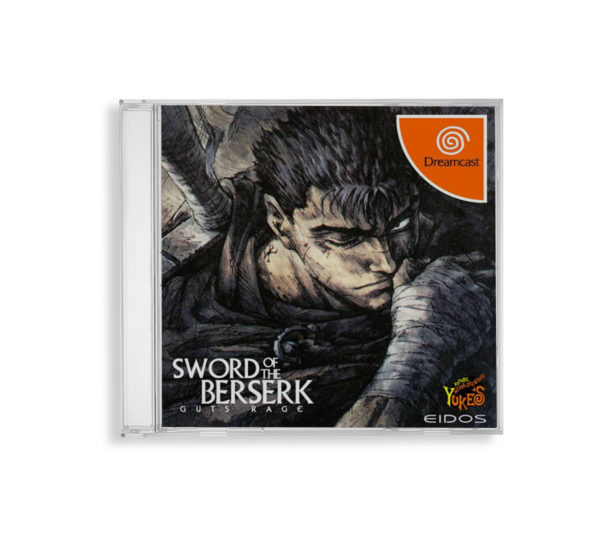 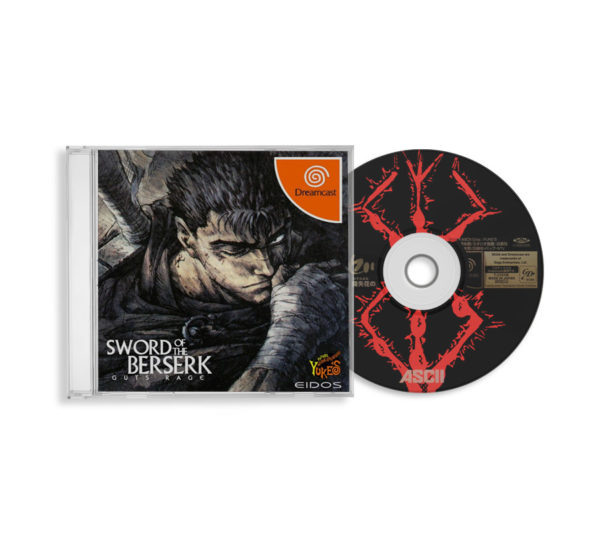 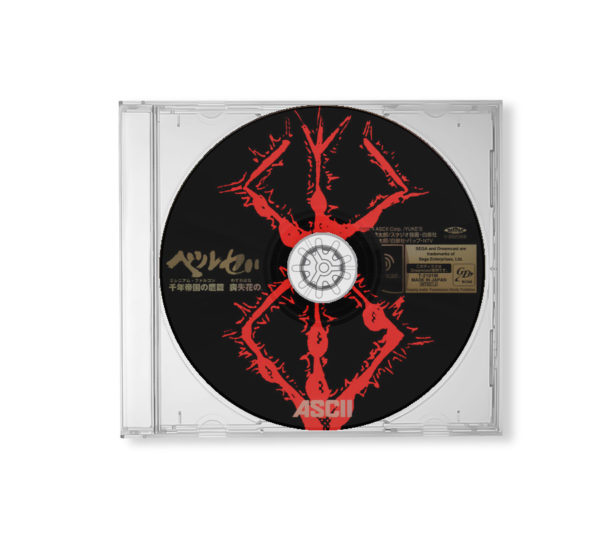 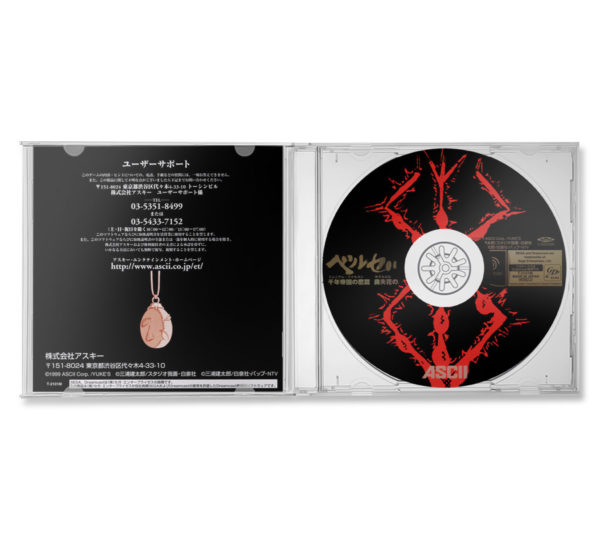 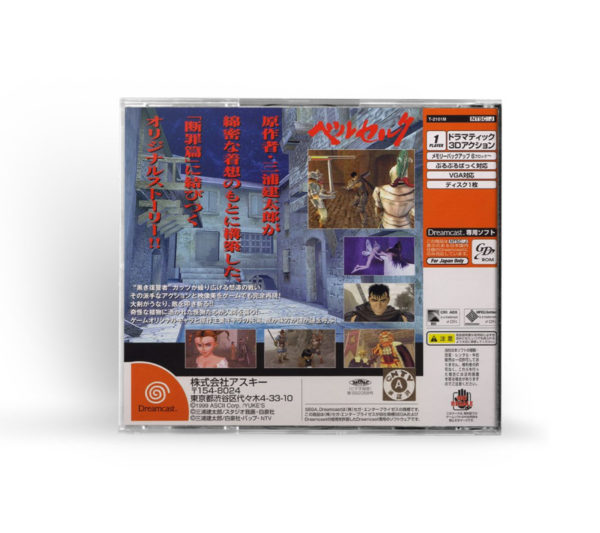 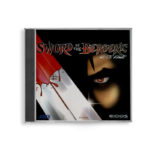 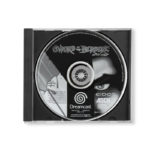 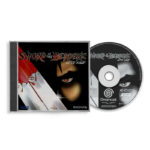 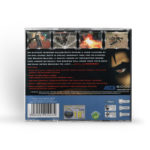 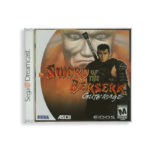 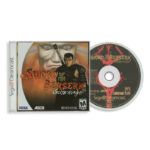 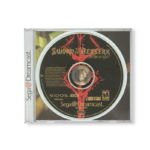 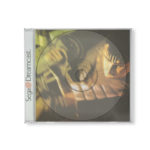 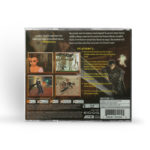 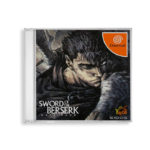 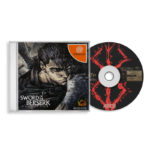 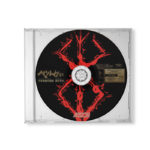 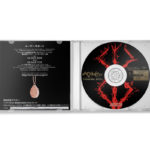 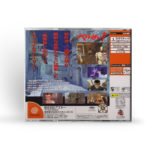 Sword Of The Berserk: Guts’ Rage (aka Berserk Millennium Falcon Arc: Chapter Of The Flowers Of Oblivion)

“SWORD OF THE BERSERK: GUTS’ RAGE (aka BERSERK MILLENNIUM FALCON ARC: CHAPTER OF THE FLOWERS OF OBLIVION)” for SEGA Dreamcast.

This a reproduction game, so you will get a new high-quality CD-R (with colored silk-screen printing), in a new black, transparent or white (it depends on the region of origin) jewel case (with colored covers on glossy cardboard), without manual, inside a new transparent film case.

Sword of the Berserk: Guts’ Rage, released in Japan as Berserk Millennium Falcon Arc: Chapter of the Flowers of Oblivion (ベルセルク 千年帝国の鷹篇 喪失花の章, Beruseruku Sennnen Teikoku No Taka Hen Wasurebana no Shō), is a hack and slash action video game for the Dreamcast.[2] It is based on the popular Berserk manga by Kentarō Miura and the game is set between volume 22 and 23 of the manga; right after Guts and Puck depart for Elfhelm with Casca (chapter 182), but before Farnese, Serpico, and Isidro catch up with them (chapter 190). The music is composed by Susumu Hirasawa, who also composed the anime series’ music.

Released around the same time as Shenmue, Sword of the Berserk is notable for its early use of quick time events (QTE). It used these to determine the different non-linear paths the player would take, depending on whether they succeed or fail in pressing the displayed button quickly enough during a QTE, allowing different ways to complete the game.

After saving a traveling performer named Rita from bandits while on their way to Elfhelm, Guts, Casca, and Puck come to a small castle town to rest. Upon arriving, they learn of a disease that transforms its victims into “Mandragorans”, making them go berserk and kill people, even their loved ones, without thinking. The ruler of the castle, Baron Balzac, learns of Guts killing a Mandragoran and brings him to the dungeon where people infected with the disease are kept. Balzac brings Guts to his laboratory while explaining that he is searching for a supposed cure. Guts learns from Balzac that the disease comes from an unusual plant, the Mandragora that grew into a tree located in a nearby village on the borders of his domain. After meeting a group of rebels that abducted Casca and learning the baron is a tyrant to their people, Guts decides to carry out Balzac’s request for the Great Tree’s heart since the baron’s findings might provide a cure for Casca’s madness. But while Guts is joined by Rita and a group of rebels, Balzac’s men raid the rebels’ hideout and capture Casca.

Losing their traveling companions while Guts confronts the Mandragorans’ matriarch Erica, who maintained her free will to protect the Mandragora that grew from the remains of a boy named Niko, he and Rita find Balzac’s men slaughtering the Mandragorans. Erica, upon seeing the utopia she created destroyed, chooses to destroy herself and the Mandragora Heart rather than hand the latter over with only the pendant she made from Niko’s charm remaining as Rita picked it up. Guts was about to fight Balzac’s men when Nosferatu Zodd arrives, the Apostle having freed Casca from her dungeon cell earlier, and they have a brief rematch that once more ends in a draw. By that time, encountering a young woman with a similar madness and assumed to be Balzac’s daughter, Puck and Casca stumble into the chamber where the fragment of the Madragora Heart that Balzac obtained awakens. This causes all Mandragorans to act up and run amok in the town as Guts and Rita return.

Fighting his way through the Mandragorans and Balzac’s forces to reach the castle, Guts and Rita see the mysterious girl and take her with them. When they finally reach Balzac’s throne room, Guts demands to know where Casca is, but Balzac only answers that they are too late to save her. Rita asks Balzac how all of these events came to pass; he recounts that he was once a kind and just ruler, but the pressure of juggling his responsibilities as both a ruler and as a husband eventually got to him, and he now finds comfort only in bloodshed. Balzac also reveals the woman to be his wife, Annette. He had preserved her life with a drug extract made from the Mandragora’s Heart, making her ageless, but at a steep price – the drug also ravaged her mind, rendering her unable to remember her own husband. Despite this, in his madness, Balzac drinks an even more potent extract of the Mandragora’s Heart, transforming himself into a monstrous figure. Guts quickly dispatches him, however, and saves Casca from the fully grown Mandragora. In a cruel twist of fate, Casca’s exposure to the Mandragora briefly restores her sanity – with Guts forced to watch her revert to her catatonic state once more. He is given little time to mourn this turn of events, however, as in the confusion of battle, Rita had dropped Erica’s pendant – revealed to be a Behelit – and the dying Balzac had claimed it, offering Annette’s life as his sacrifice in order to be reborn as an Apostle. Guts finds himself forced into battle once more, but manages to defeat the Apostle Balzac despite his new-found powers. With the town reverting to some normalcy, Guts and his group continue their journey; Rita promising to not forget them. Some time after Guts’s group leave, the Skull Knight appears in Balzac’s castle and swallows Balzac’s Behelit.

From Wikipedia: The Free Encyclopedia
https://en.wikipedia.org/wiki/Sword_of_the_Berserk:_Guts%27_Rage

Be the first to review “Sword Of The Berserk: Guts’ Rage (aka Berserk Millennium Falcon Arc: Chapter Of The Flowers Of Oblivion)” Cancel reply