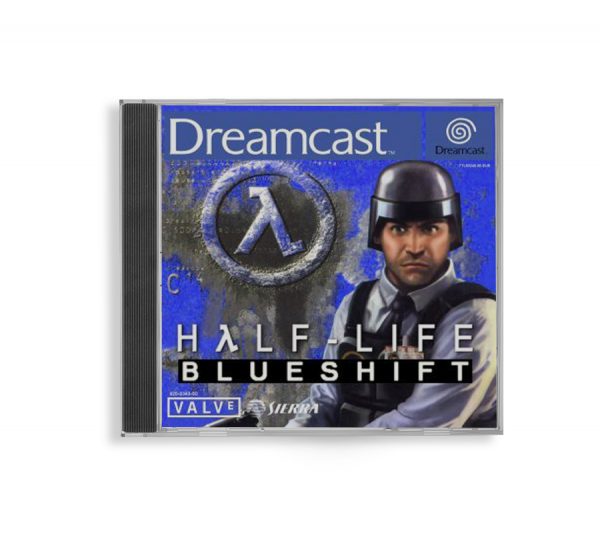 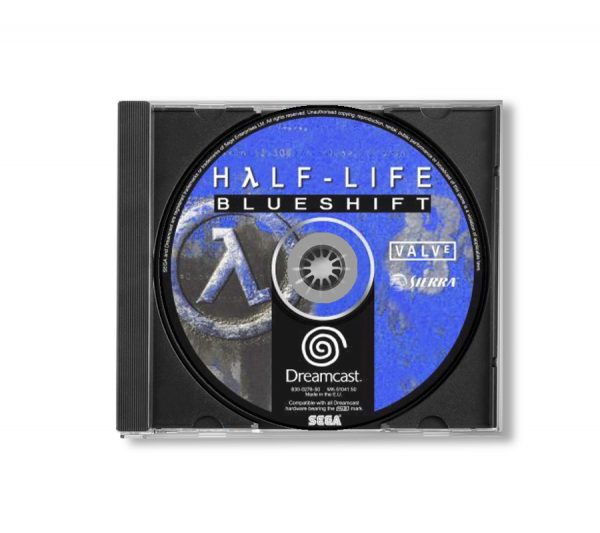 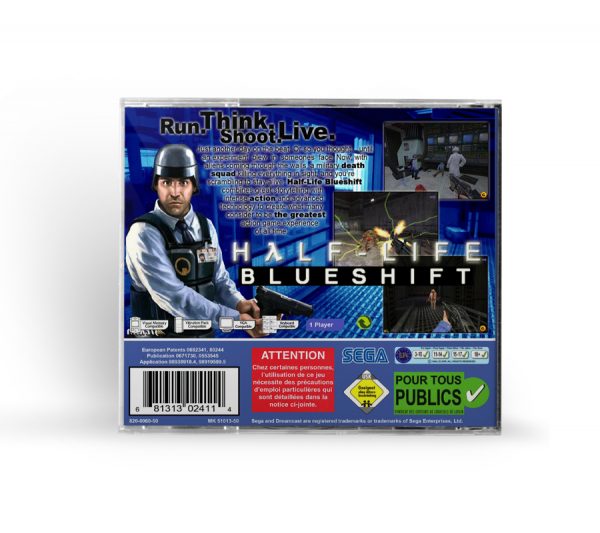 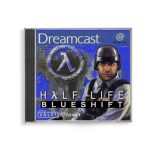 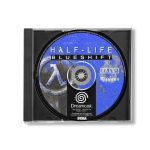 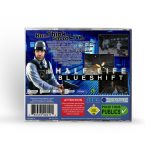 Half-Life: Blue Shift is an expansion pack for the first-person shooter video game Half-Life (1998). It was developed by Gearbox Software with Valve and published by Sierra On-Line. Blue Shift was the second expansion for Half-Life, originally intended as part of a Dreamcast port of Half-Life. Although the Dreamcast port was cancelled, the Windows version was released as a standalone product on June 12, 2001 for Windows. It was released on Steam on August 24, 2005.

As with Gearbox’s previous expansion pack, Opposing Force (1999), Blue Shift returns to the setting and events of Half-Life, but portrays the story through the eyes of another character. Players control security guard Barney Calhoun, employed by the Black Mesa Research Facility, who must fight his way to safety during an alien invasion. Blue Shift also includes a graphics pack that upgrades the Half-Life models and textures.

Blue Shift received mixed reviews. Many reviewers were critical of the short length and lack of new content, although the new graphics were praised.

As an expansion pack for Half-Life, Blue Shift is a first-person shooter. The overall gameplay of Blue Shift does not significantly differ from that of Half-Life: players are required to navigate through the game’s levels, fight hostile non-player characters and solve a variety of puzzles to advance. The game continues Half-Life‘s methods of an unbroken narrative. The player sees everything through the first person perspective of the protagonist and remains in control of the player character for almost all of the game. Story events are conveyed through the use of scripted sequences rather than cut scenes. Progress through the game’s world is continuous; although the game is divided up into chapters, the only significant pauses are when the game needs to load the next part of an environment.

The player battles through the game alone, but is occasionally assisted by friendly non-player characters. Security guards and scientists will occasionally help the player in reaching new areas and convey relevant plot information. Blue Shift also includes a substantial section dedicated to keeping a major character in the story safe from enemy characters, and escorting him to a specific location. A selection of enemies from Half-Life populate the game, including alien creatures such as headcrabs and Vortigaunts. The player also encounters human opponents in the form of a detachment of US Marines who have been sent to eliminate the alien threat and silence any witnesses. Blue Shift does not elaborate on the storyline in Opposing Force, the preceding expansion pack, and no enemy characters or weapons introduced in it appear in the game. The player is instead given access to a limited selection of Half-Life‘s original weaponry.

Blue Shift is set in the same location and time frame as that of Half-Life, taking place at a remote New Mexico laboratory called the Black Mesa Research Facility. In Half-Life, the player takes on the role of Gordon Freeman, a scientist involved in an accident that opens an inter-dimensional portal to the borderworld of Xen, allowing the alien creatures of Xen to attack the facility. The player guides Freeman in an attempt to escape the facility and close the portal, ultimately traveling to Xen to do so. As in Opposing Force, Blue Shift shows the events of Half-Life from the perspective of a different protagonist. The player assumes the role of Barney Calhoun, a security guard working near the labs where the accident takes place. Calhoun is responsible for the preservation of equipment and materials and the welfare of research personnel, and after the accident turns Black Mesa into a warzone, he must work with Dr. Rosenberg, a high-ranking scientist involved in the experiment, to evacuate the facility.

Blue Shift begins in a similar manner to Half-Life, as Barney Calhoun rides a train through the Black Mesa facility to reach his place of work. After reporting for duty, Calhoun is instructed to assist in maintenance on a malfunctioning elevator. As Calhoun finishes repairs, however, Freeman’s experiment takes place and results in a “resonance cascade”, causing massive damage to the facility and teleporting alien creatures into the base. The elevator is badly damaged and fails, sending Calhoun plummeting into the depths of Black Mesa.

Calhoun regains consciousness at the bottom of the shaft and begins to fight his way to the surface to escape. Emerging near Black Mesa’s classification yards, Calhoun learns that Dr. Rosenberg and his colleagues plan to escape the facility using teleportation technology. After freeing Rosenberg from the captivity of the US Marines detachment sent to silence the facility, Calhoun escorts him to a decommissioned prototype teleportation laboratory, where several Black Mesa employees have already gathered. Rosenberg then teleports Calhoun to the Xen border world to calibrate research equipment needed to pinpoint a teleport destination outside of Black Mesa. Upon his return, Rosenberg informs Calhoun that the teleporter’s battery power has been exhausted, and contact has been lost with a team sent to acquire a new power cell.

Calhoun travels to the power generators on a lower level to find a fresh power cell while firefights rage between the Marines and the forces of Xen. After returning with a new power cell, Calhoun assists Rosenberg in evacuating the few surviving personnel through the teleporter. Calhoun is the last to enter the portal and as he does so, Marines breach the laboratory and fire on him, causing the teleporter to explode. As a result of the teleporter’s destruction, Calhoun enters a “harmonic reflux”, causing him to be rapidly teleported to a variety of locations in Xen and Black Mesa. At one location, he witnesses Freeman’s capture by Marines midway through Half-Life, before eventually stabilizing at the intended teleport location with Rosenberg at the outskirts of Black Mesa, where they then escape the facility in a company SUV.

Blue Shift was announced in the second quarter of 2000 as part of an upcoming Dreamcast port of Half-Life. While the port was developed by Captivation Digital Laboratories, Blue Shift was developed by Gearbox Software, who also developed the first Half-Life expansion, Opposing Force. The game had the working title Half-Life: Guard Duty; publisher Sierra Entertainment announced the name Blue Shift on August 30, 2000. As with Opposing Force, the title has a double meaning, referring to both the blue shift light phenomenon and the name of Barney’s shift. The Dreamcast port would include higher detail models and textures that were double the polygon count of Valve‘s original Half-Life models.

At the European Computer Trade Show in September 2000, information about Blue Shift‘s story and development direction was revealed, along with a release date of November 1, 2000, for the Dreamcast version of Half-Life. The port was delayed by Sierra to ensure the “high expectations of consumers” were met, anticipating release by the end of the year.

On March 29, 2001, Sierra that Blue Shift would also be released for Windows as a standalone game that would not require the original Half-Life to run. The new models developed for the Dreamcast version would also be included in the PC version as the Half-Life High Definition pack, and could be applied to Half-Life and Opposing Force. At the E3 2001, Gearbox announced that Blue Shift was complete and exhibited a playable version. It was released on June 12, 2001. On June 16, 2001, Sierra canceled the Dreamcast port of Half-Life, citing “changing market conditions”. A late build of the Dreamcast version eventually leaked online, featuring complete versions of Half-Life and Blue Shift.

Blue Shift and the High Definition pack were initially absent from the launch of Valve’s content delivery system Steam in September 2003, despite the presence of both Half-Life and Opposing Force on the system. The game was released on Steam on August 29, 2005 along with the High Definition Pack. Blue Shift was also published as part of Sierra’s Half-Life: Generation compilation in 2002, and as part of Valve and Electronic Arts‘ Half Life 1: Anthology on September 26, 2005.

From Wikipedia: The Free Encyclopedia
https://en.wikipedia.org/wiki/Half-Life:_Blue_Shift