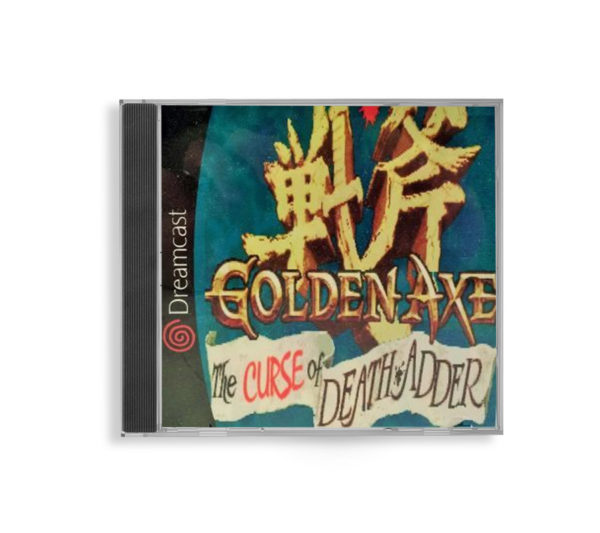 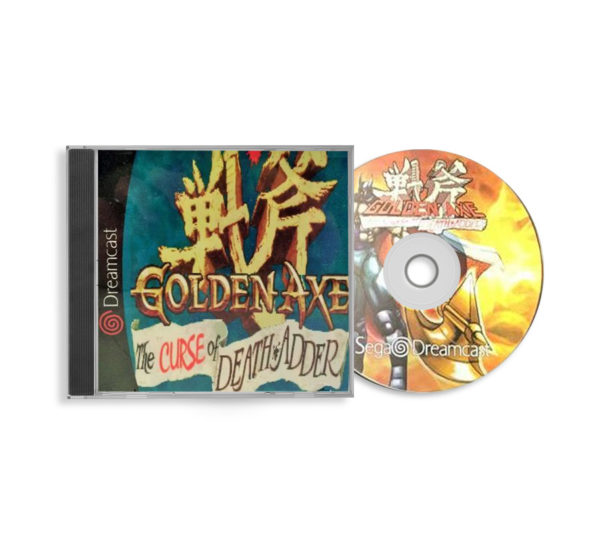 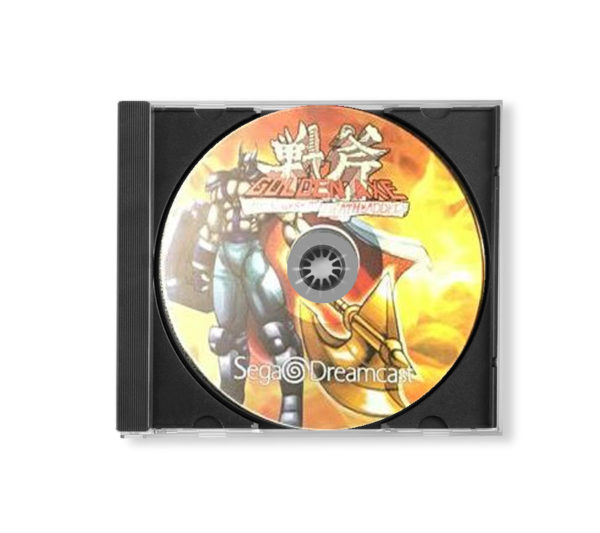 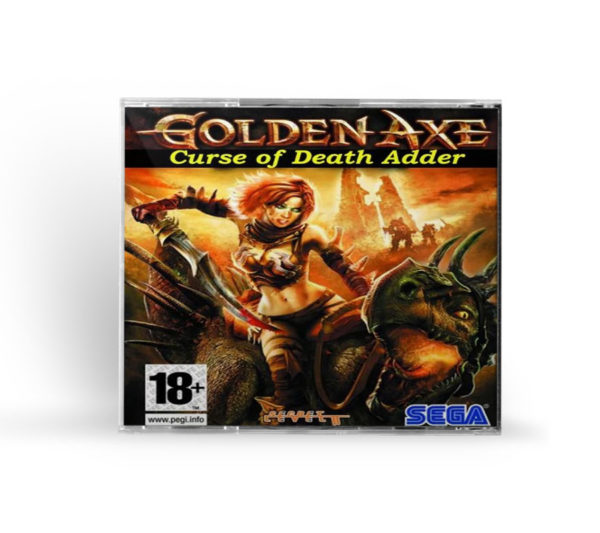 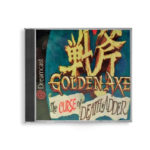 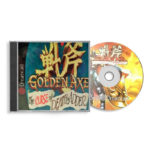 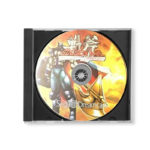 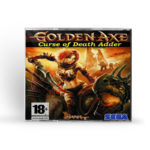 Sega Dreamcast
How about The Curse of Death Adder? Never heard of it? Me neither until about a year ago. While doing some research on Senile Team’s Beats of Rage, my eyes were opened to a whole new world of side scrolling beat ’em up and hack ‘n slash type games. One of which was this “new” Golden Axe game. We are here to look at the game itself. 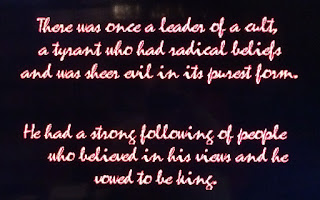 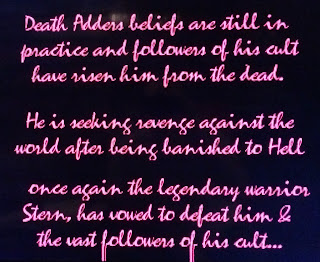 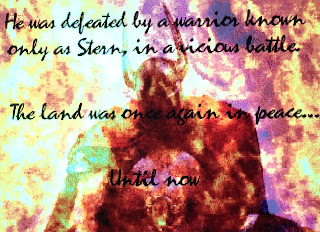 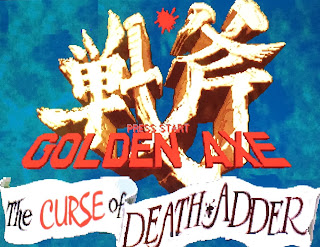 Now that is out of the way, it appears the story for Curse takes place after the events of Revenge of Death Adder.

The title screen offers a few options for you to chose from. The Movie Option is set to “disabled”, but it doesn’t appear that you can change this setting. ‘Options’ takes you to a screen where you can alter some of the audio and video settings. ‘How to Play’ gives you a basic tutorial of how to control your character. ‘Hall of Fame’ is basically your high scores.
One you choose ‘Start Game’, you get to chose from Story, Beginner or Battle. Story and Beginner is the same game, but Beginner mode seems to deal out a little more damage to enemies and you take less damage. 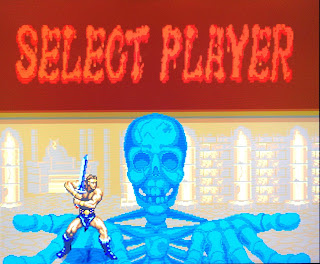 On the Select Player screen you have one option, Stern. The Ax Battler wanna be from Revenge of Death Adder. Once you’ve made up your mind of the character you want to use, the game pauses for a quick second to load the game. 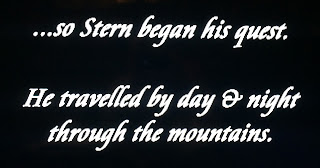 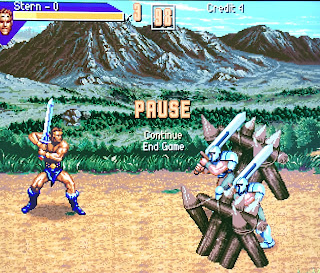 The Story mode starts you out with 3 lives and 4 credits/continues. You can control your character with the d-pad or the analog stick. The A button attack while the B button makes your character jump. No longer can you do a more powerful attack by pressing the attack and jump buttons at the same time. Now you just have to do a quick double tap on the d-pad in the direction you want to attack. In Stern’s case, this causes you to do a uppercut swipe of your sword. If you can make contact, this attack deals some good damage. Thankfully the classic Golden Axe yells and screams are present when the enemies are attacked. You even get some red blood spurting when you attack enemies (including roadblocks and treasure chests).
The Y button summons your magic, but even this has been changed from what you may be familar with. You don’t have a magic gauge this time around, so don’t expect to level up your magic. You can carry more than one vial at a time, but the earth magic is basically worthless. It’s not a screen clearing attack anymore, in fact the little geysers Stern summons can actually miss the enemies if they aren’t in the right place on screen! At times it’ll help you get out of a pinch you may find yourself in.
You immediately start out in a familiar area. Do the guard sprites ring any bells? Any Capcom bells? Yes, the enemies you’ll encounter in the first episode have been lifted from Capcom’s awesome game, Knights of the Round. 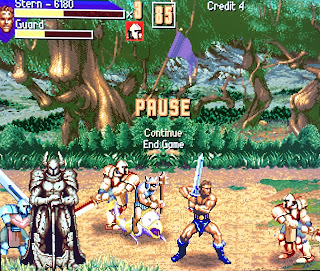 Some of the more traditional Golden Axe enemies are included in the game, even some of the beasts. Sadly you are not able to ride these beasts. When you attack them, they have a new animation where the beast falls back with it’s rider. 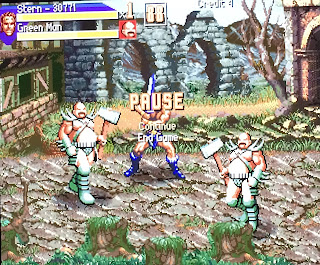 The game is broken up into different episodes and the first episode is quite long. 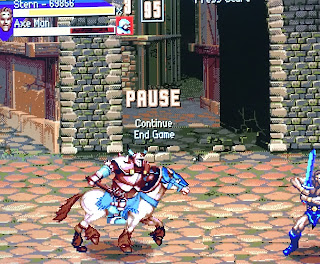 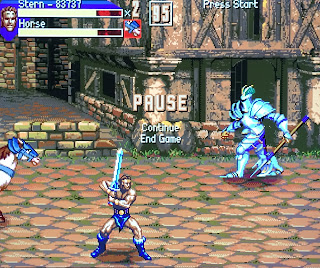 This area looks really familar. Your attack has a rather short range and some of your enemies have larger swords, staffs or axes they attack with. This means that attacking them head on, being on the same plane, wield lots of damage…to you! If you attacked them from a plane just above or below them while pressing in their direction would let me score some hits without having to worried about being carved up. Of course this strategy doesn’t always work and there are times there are so many enemies on the screen you’ll likely take some hits. 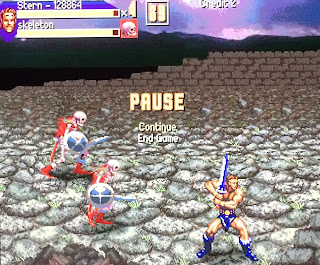 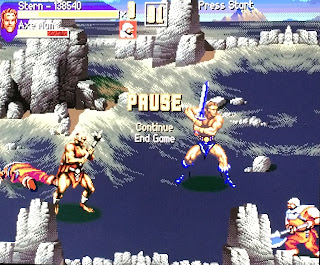 Be the first to review “Golden Axe: The Curse Of Death Adder (Region Free)” Cancel reply