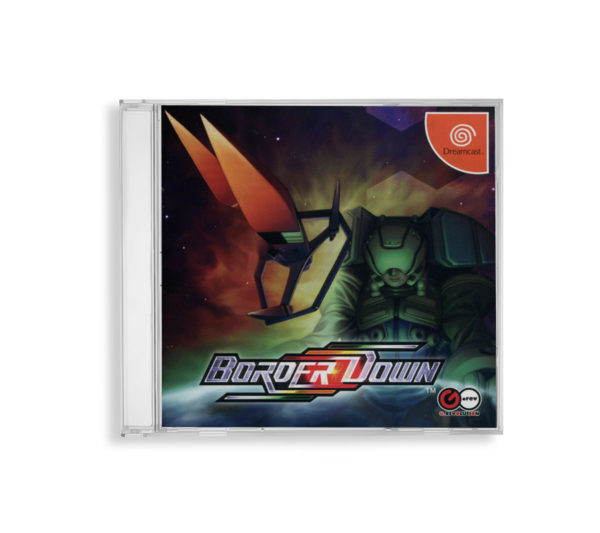 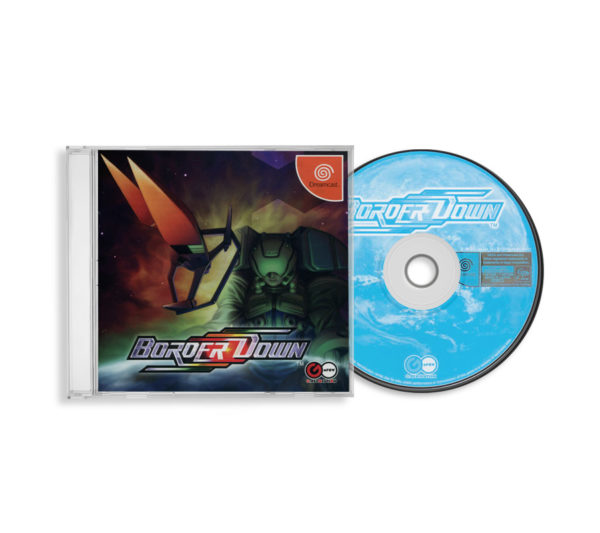 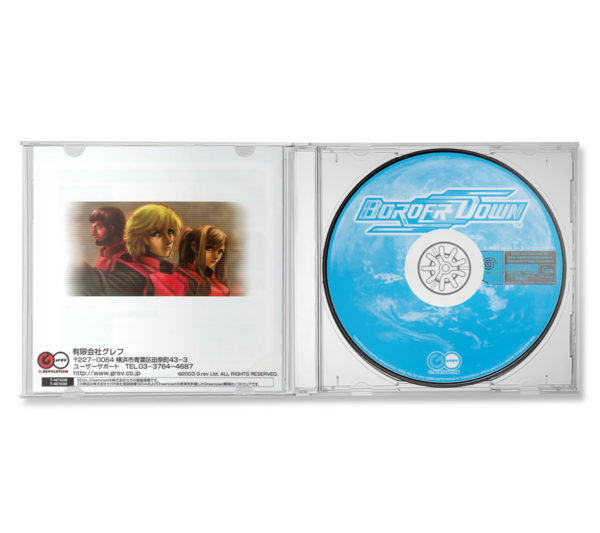 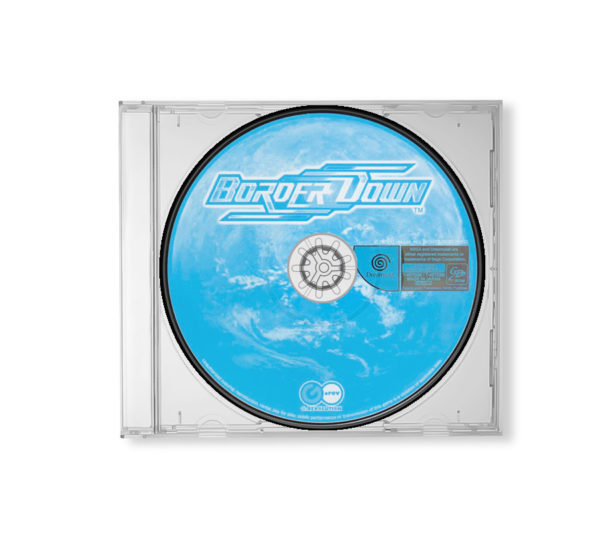 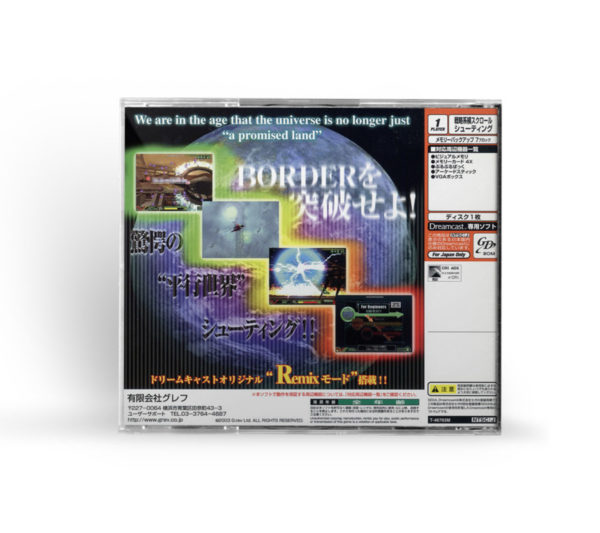 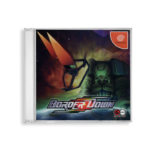 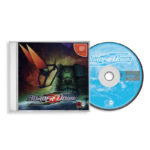 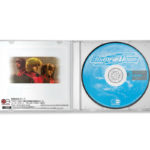 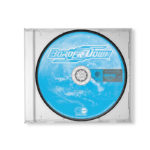 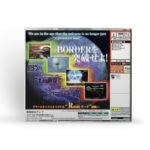 This a reproduction game, so you will get a new high-quality CD-R (with colored silk-screen printing), in a new white jewel case (with colored covers on glossy cardboard), without manual, inside a new transparent film case.

Border Down is a horizontally scrolling shoot ’em up video game developed and published by G.rev. It was released in Japanese arcades in April 2003 on Sega NAOMI hardware, and was ported to the Dreamcast later that year. The story takes place in the future where humans are defending their Mars colony from an invading alien attack. The game employs a “border system” where each stage has three variations of different difficulty. The player starts on the easiest variation, and is lowered to a more difficult variation with each subsequent loss of a life.

Producer Hiroyuki Maruyama was heavily inspired by Taito’s shooter Metal Black (1991) and founded G.rev with ex-Taito employees specifically to develop a shooter of his own. The team of five did subcontract work to gather funding and build their skills programming NAOMI arcade hardware. Among the projects they worked on were Treasure’s Ikaruga (2001) and Gradius V (2004). Due to lack of funds, they were not able to realize all the ideas they conceptualized for the game. Border Down was released to mixed reception, but was commercially successful and continues to maintain a steady interest from shooter fans. G.rev went on to make other shoot ’em ups including Senko no Ronde and Under Defeat.

Gameplay
Border Down is a side-scrolling shoot ’em up set in a futuristic setting. Centuries after humans have colonized Mars, hostile aliens begin attacking the planet. The Mars defense force mobilizes and launch a new type of unmanned aircraft. The player takes on the role of a pilot, controlling the aircraft through a remote control interface. The game’s name is derived from its “border system”. Each stage has three parallel variations, or “borders” of varying difficulty. The player starts on the easiest border (“green”), and if they lose a life, drop to “yellow”, and then finally the difficult “red” border. If the player loses a life in the red border, it is game over, though a continue option can be unlocked through repeated play. Each border is slightly different from the others, usually featuring other enemies and modified stage layouts and backgrounds. The final stage and ending are determined by the amount of time spent in each border during a playthrough. The Dreamcast version also features a “Remix mode” with new enemy attack patterns.

The ship’s main weapon can either be fired as a continuous barrage of bullets by holding down the fire button, or as a set of homing missiles by tapping it. A power meter slowly fills up over time which determines the strength of the ship’s weaponry. It can also be boosted by destroying enemies. This meter can also power a secondary laser attack, which has an additional function of canceling out any boss attack, reflecting it back at them. Using the laser comes at a cost, as it drains the meter and therefore weakens the main weapon.

Development
Border Down was developed and published by G.rev, a team founded by producer Hiroyuki Maruyama with the explicit purpose to develop a shoot ’em up. The team consisted of five ex-Taito employees: three programmers, one designer, and Maruyama himself. After founding the company in July 2000, he first needed to build capital and give his team an opportunity to learn the skills and techniques to develop a shooter. They were able to gather most of the funds through producing their first game, Doki Doki Idol Star Seeker (2001), a puzzle game for the Sega’s NAOMI arcade board. The remaining amount was accumulated through freelance work, including subcontract work with Treasure on two shooters, Ikaruga (2001) and Gradius V (2004). Ikaruga gave G.rev the key experience of programming for NAOMI hardware.

The initial concept for Border Down took root with Maruyama before he founded G.rev. He was heavily inspired by Taito’s shooter Metal Black (1991), specifically the game’s “Beam Level” system. He also borrowed ideas from his experiences with producing G-Darius (1997) with Taito, particularly the game’s branching level system which inspired the border system in Border Down. With a parallel world system like this, the team would not need to develop as many distinct levels. This was one of the few parts of his original concept that was kept in the final game. For visual inspiration, Maruyama pulled from Kim Stanley Robinson’s science fiction novel Red Mars. The music was composed by Yasuhisa Watanabe, who also composed the music to Metal Black and was the only member of the staff who had worked on the 1991 shooter. The team had to cut a significant amount of material due to lack of funds. In particular Maruyama wanted to flesh out the ending and opening cinematics. They also had plans for more visual flair, including background details and explosion effects, but had to cut about a third of these ideas because of the NAOMI’s graphical limitations. They commissioned help for extra sound and design work.

Release
The Dreamcast port was released a few months after the arcade version, on 25 September 2003. If bought through Sega Direct, the game came with a Border Down branded mouse pad. In addition to the standard version, 3000 limited edition copies were produced that came bundled with the soundtrack. The soundtrack contains tracks not included in the original game, and was also sold separately. Maruyama was prepared to fold G.rev if Border Down was not successful, but the number of customer orders at launch exceeded G.rev and Sega’s expectations, so they continued producing new copies until they felt demand was met.

From Wikipedia: The Free Encyclopedia
https://en.wikipedia.org/wiki/Border_Down

Be the first to review “Border Down” Cancel reply